Qatar Airways has returned one of its Airbus A380s to Hamad International airport ahead of the type’s return to service for the first time since the beginning of the Covid-19 crisis.

A7-APG completed a positioning flight from the old Doha International airport – where it had been in storage – to Qatar Airways’ hub on 2 November. The airline describes the aircraft as the “first A380 officially back in the skies” since the beginning of the pandemic.

Qatar Airways will serve London Heathrow and Paris Charles de Gaulle with the superjumbo from mid-December this year, it states. 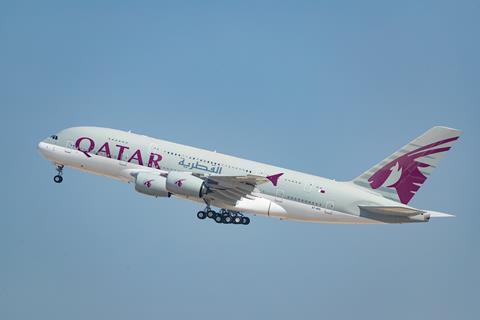 While Qatar Airways chief executive Akbar Al Baker has frequently talked down the A380’s future role in the carrier’s fleet, the airline is short of widebodies following the grounding of 13 A350s on concerns about paint degradation.

The Oneworld carrier has not said how many A380s it plans to return to service, but Al Baker has previously suggested he expected only half of the carrier’s 10 examples to fly in Qatar Airways colours again.

Cirium fleets data shows that A7-APG was parked at Hamad International on 19 March 2020 as the severity of the Covid-19 crisis was becoming clear, before being moved to storage at Doha International on 6 April. The Engine Alliance GP7200-powered jet was delivered to Qatar Airways in December 2016, making it the fourth-newest example of the type in the airline’s fleet.