South Korean low-cost carrier T’way Air has commenced service with the Boeing 737 Max 8 after receiving its first example in December.

The aircraft is equipped with 189 seats, each equipped with a holder for personal mobile devices and a USB charging port, says the carrier. 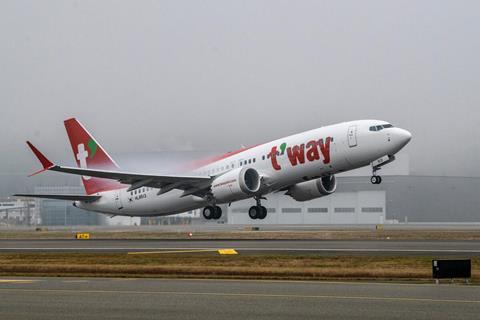 The jet bears registration HL8513 and is leased from AerCap.

T’way adds that the Max 8’s additional range of the 737-800 will also allow it to serve more distant destinations such as Central Asia, Indonesia, and Singapore.

For the time being, the carrier is operating the Max 8 on the Seoul Gimpo-Busan route.

A second Max 8 will be delivered at the end of the month.