Future dreaming as A380 nears the end

It has been a rapid rise and fall for the Airbus A380, which not so long ago was being hailed as the future of long-haul air travel.

The superjumbo would be, forecasts said, the perfect tool for airlines operating into mega-hubs such as Dubai that were beginning to spring up. 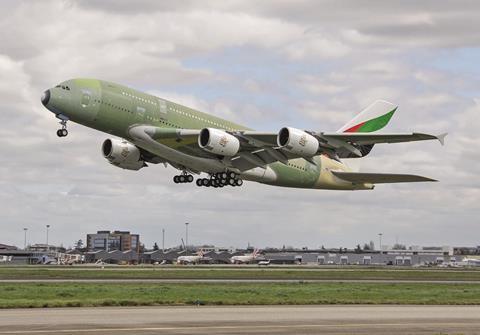 Last of its kind

But the planners at Airbus failed to take into consideration the efficiency gains available from a new generation of widebody twinjets that allowed operators to open up previously uneconomical point-to-point routes.

While the A380 limped on with flagging sales – ultimately forcing Airbus to axe the programme – it was assumed that the in-service fleet would continue flying for decades to come.

Then Covid-19 intervened and airlines reassessed their attachment to the double-decker. Outside the fleets of a handful of operators – British Airways, Emirates and Qantas, for example – the A380 is unlikely to make much of a reappearance in the post-pandemic world.

What, then, is the future of air transport? Clearly, that depends on who you ask. As we report elsewhere in this issue, there are those banking on supersonic speeds being the answer.

The likes of Aerion and Boom Supersonic view the ability to shave significant time from journeys as a unique selling point.

While projects are likely to be technologically feasible, to be able to sell these new aircraft in significant volumes their manufacturers will have to ensure that supersonic flight is not merely the domain of the ultra-rich.

Although it would be an enormous stretch to imagine an EasyJet-operated supersonic jet, they must be sufficiently cost-effective to appeal to an audience wider than a handful of niche operators.

Moreover, as aviation’s environmental performance faces ever-closer scrutiny, those supersonic jets will have to be as green as possible to avoid any backlash.

Elsewhere, though, the prospect of a cleaner air transport industry is the raison d’etre of other developments. For many of these, hydrogen is seen as the fuel that enables that sustainable future.

Hydrogen is not without its issues, of course, but nonetheless it appears more feasible as a power source for large transport aircraft than batteries do at present, even allowing for improving energy densities.

However, there are others who see hydrogen through a different filter. They argue that so-called sub-regional aircraft – the Britten-Norman Islander, among others – can be given fresh impetus if a fuel source can be found that is both cheap and non-polluting.

In theory, such aircraft could link towns or cities currently under-served by any mode of transport, or provide a more sustainable lifeline to island communities (who may also be able to produce their own hydrogen through use of two abundant natural resources: wind and waves).

At this early stage of development it is hard to say who will succeed, but what is clear is that aviation is on the cusp of a radical change where new technologies could prove more disruptive than ever the A380 was.