You can tell the deep impact that the coronavirus pandemic is having on the aviation industry when one of its traditional career paths is turned entirely on its head.

For years, many military pilots at the end of their service – whether rotary- or fixed-wing – have exited the armed forces and taken a better-paid position in the cockpit of a commercial aircraft. 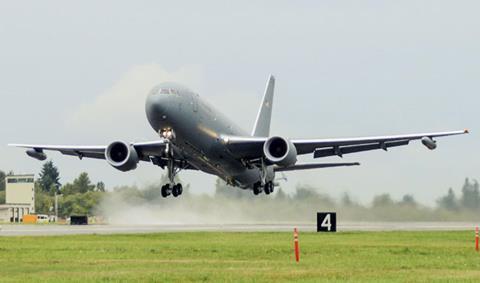 KC-46A tanker is derived from commercial 767

While tactical flying is clearly not a requirement of typical airline operations, sound judgement and an ability to work under pressure translate well to a commercial environment when things go badly awry.

While Chesley Sullenberger, the pilot at the controls of the stricken Airbus A320 during the Miracle on the Hudson – and a former US Air Force (USAF) aviator – is the most obvious example, there are numerous others.

But the well-trodden pathway that has seen military crews swap one uniform for another could now be reversed, with the USAF investigating the possible recruitment of commercial airline pilots laid off on the back of coronavirus.

Although still in the early stages, the USAF initiative could help it address shortages of key personnel. Presumably, it would not throw ex-airline pilots straight into the cockpit of a fast jet, but with a number of airliner-derived types in the service’s inventory, it is not too much of a logical leap to imagine a former Boeing 767 captain finding employment at the controls of a KC-46A tanker, for example.

Of course, the move does nothing to address the pay differential between the two segments that prompts military pilots to switch in the first place, but with downward pressure likely on wages in commercial aviation, perhaps that will happen anyway.