Why did you choose to work in aviation?

I am a plane geek. I grew up living around the world and became a young appreciator of a differentiated cabin. I’m also a PhD physicist who appreciates the complexity of propelling 400t into the air. I married a business jet pilot, which sealed my fate – our weekends with our young girls often involve plane‑spotting picnics. Our house is adorned with vintage airline posters and aircraft models.

After my PhD, I worked for the Boston Consulting Group (BCG) for nine years, between our London and Atlanta offices. My third project was a transformation programme with a low-cost carrier and I haven’t looked back. In nine years at BCG I worked with five airlines (in Europe, the Middle East and the USA) on topics as diverse as strategy, operational efficiency and commercial growth. I moved to Virgin Atlantic, a former client, following my second maternity leave and have been there about two months. 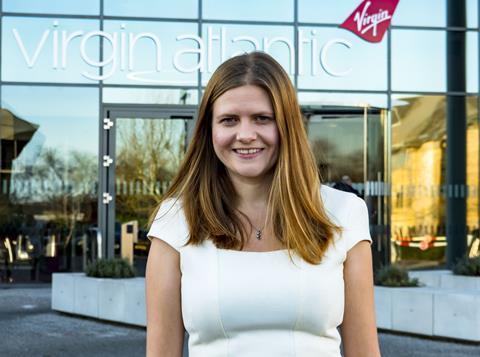 What does your current role involve?

As vice-president corporate development, I am responsible for sustainability, corporate strategy, expansion at London Heathrow (with the third runway) and government affairs. It’s a broad, high-impact role that keeps me on my toes but I wouldn’t have it any other way.

A large part of your role is sustainability. What is Virgin Atlantic doing about carbon emissions?

Virgin Atlantic has long been a leader in sustainable aviation and carbon reductions have been our number one environmental priority from the start. In 2007, we established our “Change is in the Air” programme and in 2012 announced our pioneering partnership on sustainable aviation fuels with clean technology company LanzaTech. The next phase is the carbon offsetting and reduction scheme for international aviation (CORSIA). This is an internationally agreed programme designed to address carbon-neutral growth within civil aviation from 2020 onwards. Virgin was one of the first airlines to call for a global carbon pricing mechanism for aviation and was delighted when CORSIA was ratified by ICAO in 2018. These market-based measures are much more environmentally effective than taxes because they give value to carbon savings and money goes directly to carbon reduction projects. Then, as current aircraft technologies reach their limits, the next big breakthrough is set to come in the form of advanced, affordable, waste-based sustainable aviation fuel technologies. We are calling on government and potential fuel suppliers to help us achieve an ambitious target of at least 20% of sustainable fuel across our operation by 2035.

You are also leading Virgin’s expansion at Heathrow airport. What does that involve?

Our ambition is to become the UK’s second flag carrier; that is a network carrier that connects passengers between domestic, short- and long-haul services. We need two flag carriers to ensure an expanded Heathrow delivers choice and competitive fares for passengers – currently one in four passengers at Heathrow has no choice over with whom they fly. Practically, that means my team is lobbying to amend the slot allocation mechanism. This was not designed for huge increases in capacity such as the third runway and will prevent effective competition. Another part of my team is working alongside Heathrow Airport Ltd to ensure that Virgin Atlantic and our partners have the right terminal infrastructure to grow and that our growth helps to achieve our net zero goals.

Where do you see yourself five years from now?

I have never been happier than since my move to Virgin Atlantic from consulting and I want to continue shaping the industry at the executive level.