Legacy of 9/11: A decade of disruption for airlines

In the decade following the terror attacks, the airline business was a sorry story when it came to making money. Giovanni Bisignani, the plain-speaking Italian who led the International Air Transport Association for a decade from 2002, said in his annual report of 2010 that the industry had lost nearly $50 billion in that decade. 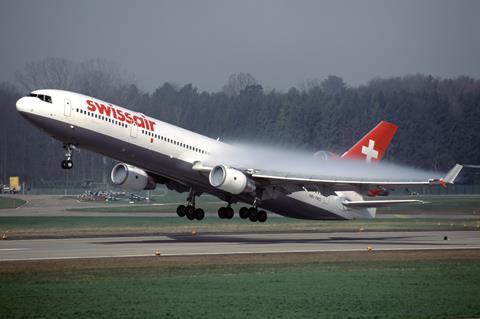 Swissair was an early casualty of the post-9/11 crisis

Less than two years after the 9/11 attacks, Bisignani told airline bosses at the IATA annual meeting in June 2003: “Our industry has been hit by the Four Horsemen of the Apocalypse. The successive impact of September 11, a world economic slowdown, Iraq and SARS has been devastating. Our industry was like the boxer who gets hit harder after every knockdown.”

In the early 2000s, this was described as a crisis, but however shocking those losses were, by the time the pandemic hit in 2020, the word crisis is not even close to describe how bad the past 18 months have been. In 2020, IATA estimates the industry lost $126.4 billion, with a further loss of $47.7 billion expected this year.

“9/11 was one of a number of catalysts that drove industry restructuring at the time, but it did not change the ultimate direction of the business. And this is exactly what Covid will do – it will speed up an evolutionary process that has already been taking place,” believes Mark Dunkerley, who had taken the chief commercial officer role at Belgium’s Sabena just weeks prior to 9/11 and joined Hawaiian Airlines as president in 2002.

The 2000s was a period of intense airline restructuring, particularly in the USA. But there is some irony in the fact that government financial support and Chapter 11 bankruptcy processes that many US carriers entered slowed change. “The weakest did not fade away. They restructured and came back stronger,” says Dunkerley. “The impact of not letting market forces play out is like taking a bandage off slowly; it prolonged the pain.”

There were failures of course in this decade. Famous names such as Ansett Australia, Air Afrique, Sabena, Swissair, Transbrasil, and TWA went away.

However, just as now, there were upstarts and disruptors ready to take advantage. As Flight International’s sister title Airline Business wrote in September 2002: “While others have suffered, the crisis has provided a springboard for the new breed of low-fare operators, with JetBlue as its poster child.” In Europe, Ryanair, Go and EasyJet were making waves, with WestJet in Canada and Virgin Blue in Australia growing fast too. 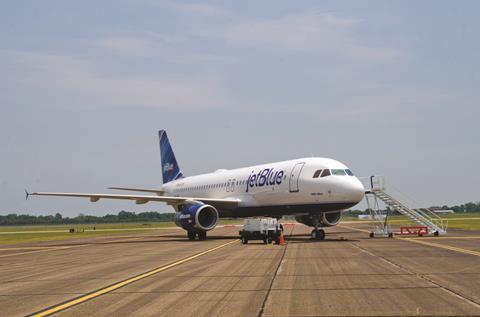 For Jeff Katz, a digital air travel services pioneer, who was chief executive of Swissair from 1997-2000 and on the board of Northwest Airlines from 2005-2009, airline consolidation that was triggered by the financial shock was the single biggest impact of 9/11 in the years that followed. The biggest saw the merger of America West and US Airways in 2005, the joining of Delta Air Lines and Northwest in 2008 and the union of Continental and United in 2010.

“Europe did different versions of consolidation with Air France-KLM, British Airways-Iberia and the formation of the Lufthansa Group, but overall, whether in the US or Europe, they have been good for airlines,” says Katz. “In the US, you now have four very powerful airlines that dominate networks. Europe is a little softer, but the by-product of carefully managing capacity has happened.”

Another major outcome of the immediate post-9/11 period was the rise of the internet to sell air tickets and travel and the acceleration of digital technology, says Katz. In June 2002, he was the chief executive of new global online travel business Orbitz Worldwide, set up by the US majors in response to the rise of online travel agencies like Expedia and Travolocity. “Orbitz took off as online access to life became essential rather than a nice to have. It was a much better designed website than those of the airlines,” says Katz.

The European carriers founded their own online travel agency, Opodo, which was launched in November 2001 by Bisignani before joining IATA. In this decade the online booking of travel increasingly became the norm. It was also a time when IATA brought in electronic ticketing to automate several outdated processes and save money.

For Dunkerley, who retired as chief executive of Hawaiian in 2018, one of the lessons of 9/11, and the series of shocks that followed during that decade, including SARs, Hurricane Katrina, oil prices spiking to $140 a barrel and the global financial crisis of 2008, showed that industry change had not gone far enough. “What was revealing about that decade was how the impact of each major shock showed that restructuring wasn’t yet done,” he says. “The industry still was not working well. It was still not producing sensible returns in good times or demonstrating resilience in bad.”

Following the big US mergers, and with capacity discipline the order of the day rather than the chase of market share, the 2010-2020 decade did usher in a period of unprecedented profitability for the US carriers and for airlines globally.

The impact of Covid has undone virtually all that progress. However, the airline industry is a resilient business driven by the strong underlying demand for air travel. The actors delivering that service will change and just as after 9/11 there will be consolidation among the strongest and low-cost carriers will flourish.