During a half year characterised by coronavirus lockdown, airlines were reminded that political instability remains a risk to flight safety

Using a six-month period to take the temperature of global aviation safety has always had its limitations, but with the industry’s operational environment changed beyond recognition by society’s reaction to the coronavirus pandemic, its only useful purpose can be to examine the nature of this moment in aviation safety history. No-one knows how long the extraordinary economic conditions and physical limitations provoked by the pandemic may continue. One thing is certain: aircraft cabins are tightly enclosed spaces – and aviation would not function commercially if “social distancing” requirements reduced load factors to 20%.

But there is another unusual factor that sets this period apart: accidental shoot-downs – in the plural. The politically unstable conditions in which this year’s two such events took place are likely to continue – and not only in the Middle East and Africa. Since shootdown, accidental or not, is a killer, airlines need to approach this risk as if it were a traditional safety threat, and develop mitigations. 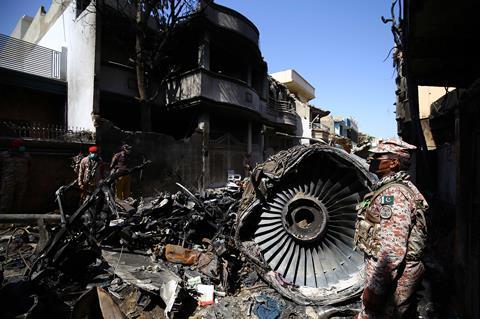 Over all, numerical comparisons with previous “normal” years have little value except to satisfy curiosity. But here they are: with only four fatal events that can genuinely be defined as accidents, that figure is two-thirds of the lowest number witnessed in the first half of recent years (see graph below). But since the amount of commercial flying that has taken place is less than one-third of normal activity, accident rates do not look good.

The single most identifiable factor affecting airline safety this year so far has been the accidental shoot-downs. There were two of them, killing 182 people combined: Ukraine International Airlines flight PS752, a Boeing 737-800 carrying 176 people, near Tehran on 8 January, and on 4 May an African Express Embraer Brasilia on a medical supply mission over Somalia. If these figures were included in the graphs depicting genuine accidents, the total number of fatal events in 2020 to the end of June would be six, and the number of fatalities 284.

The four other fatal accidents were not unusual. A fatal outcome was not inevitable in any of them, but that was their fate. The Pakistan International Airlines Airbus A320 crash at Karachi looks as if the causal sequence began with an extreme example of a crew deciding to ignore the fact that their final approach to the runway was not merely unstable, but unviable, being far too high and fast.

The aircraft involved in the shoot-down events were both attacked by military forces, but these  civil flights were not the intended targets – they were misidentified as hostile air movements by the military. So categorising the shoot-down action as “hostile” is not strictly accurate, because if they had been successfully identified they would not have been targeted. The unintended outcome was more like the military definition of collateral damage, and the primary causal factor in both cases seems to have been a failure of communication between military units, their command and control, and local air traffic control.

The effect, however, was disastrous in both cases, so debating the military intention is semantics as far as the airlines and the victims are concerned. Meanwhile, just in case any airlines are inclined to write this risk off as a pair of freak events within a six-month period, it is worth recalling that there have been three other such fatal military errors in the past few decades.

In chronological order, first there was the July 1988 misidentification and shooting down of an Iran Air Airbus A300 by a missile launched from the USS Vincennes in the Gulf. The aircraft was flying a scheduled service from Bandar Abbas, Iran, to Dubai, but the Vincennes crew believed it was a hostile aircraft and all 290 people on board were killed.

Then, in October 2001 a Sibir Airlines Tupolev Tu-154 flying from Tel Aviv to Novosibirsk was brought down over the Crimean Sea when it became the victim of a missile fired at a target drone during a Ukrainian military exercise. The missile missed the drone and homed in on the Sibir flight, killing all 78 people on board. The most recent of these tragedies was the case of flight MH17, a Malaysian Airlines Boeing 777 flying over eastern Ukraine. It was shot down by pro-Russian Ukrainian rebels using a Russia-supplied missile and expertise, according to the report produced by the Netherlands air accident investigation agency. It was probably also a misidentification shoot-down, but since Russia and the Ukrainian rebels deny any connection with the event despite compelling evidence, the intention will never be clear. Nevertheless, all 283 passengers and 15 crew died.

ICAO has looked at what might be done to mitigate the risk of airliner shoot-downs, both accidental and intentional, but basically it has found that the risk assessment means already exist – it is just a case of employing them. National governments, their transport departments, aviation authorities, as well as organisations such as ICAO and IATA, all know – or have a duty to monitor – where war or conflict zones are. Airlines are completely responsible for assessing all traditional threats before every flight, including meteorological risk and notices to airmen about the serviceability of the destination and airports en route. Assessing the risks to commercial aviation of flying through, or close to, conflict zones is just one more responsibility that the airlines have – and always have had. Although airlines can approach their own government for advice, the decision is entirely theirs.

The six-month period under study was marked by the almost complete cessation of commercial passenger flying from March to June, but a healthy level of cargo flying continued in both pure freighters and adapted passenger aircraft. Then, during late June, with coronavirus deaths falling as nations’ lockdown measures resulted in some level of apparent control over the spread of contamination, airlines slowly began to restore some passenger schedules. That process continues, and the airlines face the challenge of preparing aircraft grounded for months to get airborne safely, and likewise retraining crew whose operating currency needs renewal. Finally, they face the task of meeting completely novel requirements for the sanitisation of cabins and of every crew and passenger function conducted within them.

An additional training load, as operations gradually resume, will be felt by airlines owning – or taking delivery of – Boeing 737 Max aircraft. Boeing has just begun its test flying programme, and the US Federal Aviation Administration (FAA) is expected to approve the Max series’ reintroduction to service by about mid-September. This will follow some 18 months of grounding while Boeing and the FAA have worked to modify the Maneuvering Characteristics Augmentation System software that has been blamed for precipitating fatal crashes of the type in 2018 and 2019. At least some of the Max pilot training on the modified aircraft is expcted to take place in a sophisticated flight simulation training device, including instruction for pilots rated on 737NG machines or the pre-modification Max itself. 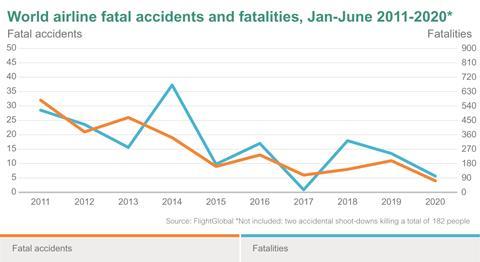 Speaking at the 24 June webcast entitled: “Restarting the engines: pilots, recency and requalifying”, convened by training and simulation group Halldale, aviation consultant and airline captain Pierre Wannaz warned airlines that pass-fail check sessions will not be enough to prepare grounded pilots for line flying resumption. Restoring their confidence, he said, is essential to providing the resilience pilots need to be ready to face unexpected occurrences. And a few unexpected events, he hinted, can be foreseen, bearing in mind that the aircraft have been grounded for months and have undergone maintenance according to non-routine patterns because of the pandemic.

The unpredictability of the rates at which passenger demand for flying will return and countries open their borders, and thus the rate at which airlines will be able to resume service, will pose training and maintenance planning challenges for airlines. Economic forecasters vary in their predictions as to when business will return to pre-pandemic levels. A few of the most optimistic predict this will happen at the end of 2021, but most are betting on 2023 or later. Also predicted is an accelerated shedding of older aircraft from fleets, particularly long-haul types, and among those the first to go will be four-engine aircraft. Wannaz suggests that about 3,000-5,000 aircraft will be sent for desert storage years earlier than they otherwise would have been.

These changes will prompt the need, according to Airbus former chief training captain Jacques Drappier, to offer early retirement to some senior pilots and to provide retraining for younger 747, A380 and A340 pilots onto the surviving fleet types. The same will be true of maintenance staff and cabin crew. Overseeing all of this forced change, financial stress and the associated disruption to skilled personnel, without a negative impact on safety, will be a considerable challenge for airline management and national aviation authorities.