The twin-engined military transport resumed flight testing in March, after an extended grounding during which time engineers sought to reduce its weight. With its flight-test programme underway again, new aircraft production is also running in parallel, says UAC. 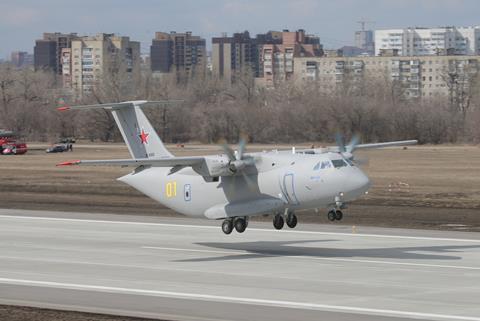 Type can take off and land on runways as short as 1,200m

Initially, the Il-112V will be produced primarily for Russia’s domestic market. Two prototypes are scheduled for delivery to the defence ministry by the end of 2021 and production aircraft are to be delivered starting in 2023, minister of industry and trade Denis Manturov said last October, according to state-run news agency TASS.

The Russian air force has two Il-112Vs on order and 27 units on option, plus letters of intent for up to 33 more, according to Cirium fleets data.

“We plan to ensure production of more than 10 aircraft per year and to gradually increase the rate,” says Sergey Yarkovoy, chief executive of Ilyushin, the transport subsidiary within UAC. “Of course, everything will depend on orders. There is a great demand for aircraft of this size in our domestic market. We hope demand will grow due to the interest from foreign customers.”

The Il-112V is intended for transporting and parachuting light weaponry and equipment, cargo and personnel. It can carry up to 50 passengers or 26 armed paratroopers. Ilyushin also sees a role for the aircraft transporting cargo in commercial service.

The transport is powered by two Klimov V7-117CT turboprop engines, and is designed to carry a payload of up to 5t. With that maximum weight aboard, the Il-112V has a range of 648nm (1,200km).

Yarkovoy says the aircraft offers greater efficiencies than older transports and has a cruise speed of 254kt (470km/h).

Ilyushin says it can take off and land on runways as little as 1,200m (3,940ft) in length. Designed to fly in rough Russian weather, the Il-112V “will be able to operate in the most difficult climatic conditions in a wide range of temperatures”, says Yarkovoy.

“The main advantage of the aircraft is its reliability and possibility of autonomous operation, including on unequipped airfields and unpaved runways,” he adds. 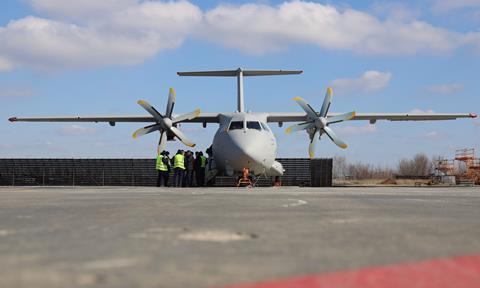 The Russian air force has ordered two Il-112Vs, and has options on 27 more

The type is intended to replace Soviet-era Antonov An-26s. There are 229 examples of that transport in service, with an average age of 41.5 years, according to Cirium data. The bulk of these, 145 aircraft, are operated by the Russian armed forces. Of the about three dozen other operators of the aircraft, most fly single digit numbers of the type.

Ilyushin also sees room for joint projects based on the Il-112V.

“The most promising option for market promotion is industrial co-operation projects for the development of a light military transport aircraft based on the Il-112V,” says Yarkovoy. “Similar projects have prospects in India and the Middle East.”

The Il-112V may find work also as a niche platform, he says. “We see a great interest of foreign customers in special versions of the aircraft, for example, a patrol modification,” says Yarkovoy. “When developing, we have initially made solutions that will allow the Il-112V to be a multifunctional platform.”

Yet, the Russian government has yet to make large commitments to the Il-112V and that may hold back the transport’s foreign sales.

“A lot of talk, no actual funding,” says Richard Aboulafia, vice-president of analysis with the Teal Group. “Maybe part of it is that the export market for aircraft in that class just doesn’t look addressable.”

That might be because the Il-112V’s performance requirements are unique to the Russian market or only fit a relatively elite customer set. It is not clear that countries that operate one or two An-26s have appetite for much more.