GE Aviation is entering the market experimental-rated kit-built aircraft, supplying the H80 turboprop for a high-performance remake of the Turbine Aircraft Legend.

The newly-branded Turbine Venom is expected to make a public debut in late July at the GE pavilion of the Experimental Aircraft Association’s annual fly-in in Oshkosh, Wisconsin.

The tandem, two-seat aircraft originally launched in 1998 as the Legend with the Walter M601 turboprop engine. GE acquired the Czech engine manufacturer a decade later, then launched the redesigned and improved M601 as the H80 turboprop engine. 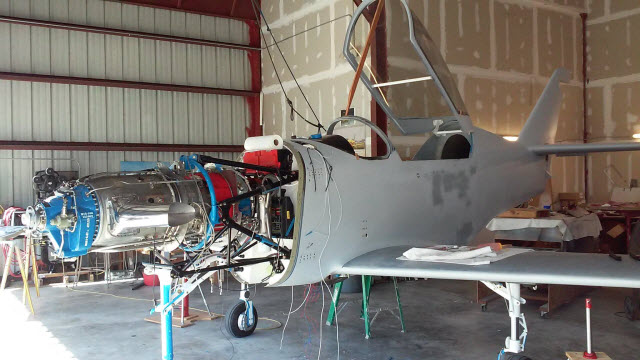 Meanwhile, deliveries of the all-composite Legend aircraft had stopped, but a private investor, Robert Metzler, acquired one of two remaining plans for the speedy kit-built aircraft.

Metzler, now chief executive of the Naples, Florida-based Turbine Aircraft, tweaked the design, adding a 40gal to the 100gal fuel capacity of the Legend.

Metzler approached GE to re-engine the M601 with the H80 turboprop. It took almost two years to persuade the manufacturer to enter the experimental aircraft market, offering an engine that comes with a 4,000h time-between-overhaul warranty.

“It took a while to blend the two worlds together,” Metzler says in an interview.

Ultimately, Metzler says he persuaded GE with the argument that the H80 risks being perceived as a “John Deere tractor” engine, due to its affiliation with re-engined crop-sprayer aircraft, among other notable designs.

The H80 should significantly improve the performance of the Metzler’s kit-built aircraft. The M601 engine lost 300shp of thrust at high altitude, reducing maximum speed. The H80 is de-rated from 1,100shp to 800shp, so has the capacity to offer maximum performance even in thinner air at high altitudes.

Metzler also replaced the 84in, three-bladed propeller with a 99in-diameter system, which also required him to increase the length of the landing strut by about 8in.

The first engine run for the new Turbine Venom is scheduled for 21 May, he says. Another 20-40h of flight time is necessary to check out the aircraft before making the ferry flight to Oshkosh in July.