Saab remains on track to deliver the first series production examples of its Gripen E in the third quarter of next year, and is also hopeful of concluding delayed sales of new-build C/D-model examples during 2018.

"We will stick according to the plan and deliver the first two aircraft to the Brazilian air force and Swedish air force next year," says Saab chief executive Håkan Buskhe. "Things are going according to plan," he said while discussing the company's financial results for 2017 on 16 February.

"Test and evaluation of the first [prototype] aircraft is going extremely well. We are getting better-standard data than we had anticipated," Buskhe says. A second prototype will join its fleet by the end of this year. 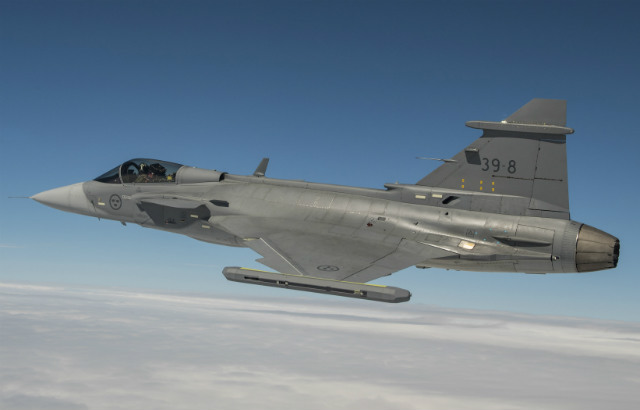 "It's always challenging to have this type of programme, but if it's not challenging then it probably will not be a good product at the end," he notes, while describing development work as progressing "fairly well".

Noting that Saab is eyeing potential opportunities to sell the Gripen E to additional nations, including Canada, Finland and Switzerland, he says: "Our performance in delivery will also prove that we have a ready product."

Buskhe says Saab had hoped to conclude new sales of its Gripen C/D by the end of last year, but that factors including political processes in potential customer nations prevented this from happening. "The number of possible deals hasn't changed," he stresses. "We have some intensive discussions with some countries, and there are great possibilities during this year."

With the US Air Force having delayed a decision in its T-X trainer competition from last year until around mid-2018, Buskhe says Saab also spent "much more than anticipated" on the activity last year. Working in partnership with bid leader Boeing, it is pursuing a deal for 350 aircraft to replace the USAF's Northrop T-38s.