The unarmed helicopters will be transferred via commercial cargo plane to Kabul airport, from the company’s Bengaluru-based helicopter division.

The Cheetal is a re-engined variant of the Cheetah – a license-produced version of the Aérospatiale Alouette II-based SA-315.

The Cheetal is powered by a Turbomeca TM 333 2M2 turboshaft, which generates 1,100shp (820kW). This is double the 550shp generated by the Artouste III B that originally powered the Chetak – HAL’s license-produced version of the Aérospatiale Alouette III, or SA-316.

The modern engine allows operations up to 23,000ft, with a greater payload and improved fuel efficiency. The type’s range and endurance increase to 345nm (640km) and almost 4h, respectively.

The Indian air force last year received its last Cheetal from a 10-strong order placed in 2006. The service operates the helicopter for high-altitude missions.

The Indian army placed an order for 20 of the type in February 2013, with deliveries expected to be complete by 2017.

HAL says it has manufactured more than 347 Chetak and 275 Cheetah helicopters since license production began in Bengaluru 45 years ago – more than the type’s original manufacturer. 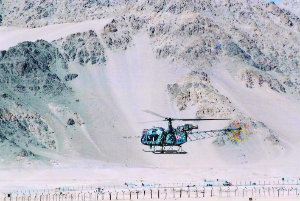