​Airbus Helicopters to work with KAI on LCH/LAH programme

Airbus Helicopters has been selected as the foreign partner to help Korea Aerospace Industries develop a five-tonne rotorcraft under the country’s requirement for a Light Civil Helicopter (LCH) and Light Armed Helicopter (LAH).

The two variants will be based on the Airbus Helicopters H155 – formerly designated the EC155. Selection by KAI will help extend the life of the H155, which from 2018 will be superseded by the new H160.

A key part of the deal is the transfer of technology from Airbus Helicopters to South Korea to help Seoul in its quest to build up its aerospace industry. 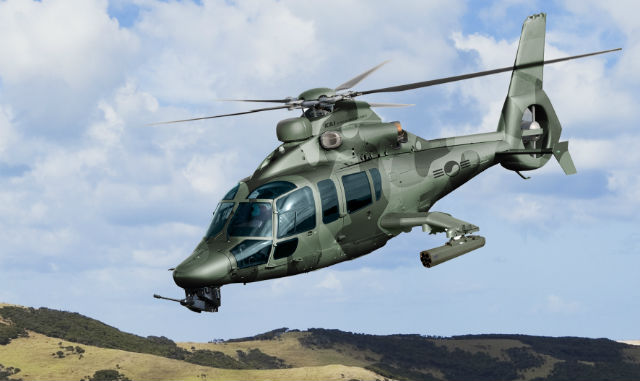 “The LCH and LAH programs will build on our collaboration with Korea Aerospace Industries on the Surion, which has become a reference in successful rotorcraft collaboration,” says Airbus Helicopters chief executive Guillaume Faury.

“By continuing our relationship, we will significantly reduce the risks of these two new development programs, while meeting all of the mission requirements.”

The LCH will enter service in 2020, and the LAH in 2022. The H155 was shortlisted for the requirement in competition with the AgustaWestland AW169.

In July 2014, two South Korean government ministries - the Ministry of Trade, Industry and Energy as well as the Defence Acquisition Program Administration – announced that KAI had beaten local rival Korean Air for the programme.

The LCH/LAH programme has an expected development budget of 1 trillion won ($884 million). The funds will come from the South Korean government and overseas investors.

The LCH will operate in a number of missions, including emergency medical services, coastal surveillance and VIP transport. It will subsequently be adapted to the LAH standard.

The LAH will replace types such as the MD Helicopters MD500 and Bell AH-1J/S Cobra in service with the South Korean army. Flightglobal's Ascend Fleets database records the service as possessing an active inventory of 252 and 77 examples of each type respectively.