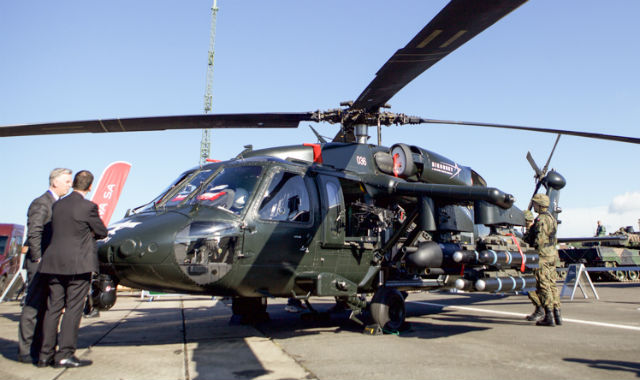 PZL Mielec says an open systems architecture design will enable the S-70i to also integrate other armaments currently in the inventory of potential export customers, plus new sensors and weapons in the future.

“Our goal is to provide militaries with the flexibility to quickly convert their Sikorsky aircraft into a weaponised platform to meet our customer’s needs,” says PZL Mielec president Janusz Zakręcki.

The armed S-70i is being pitched at central and eastern European countries which require multi-purpose helicopters to conduct armed assault missions in support of ground troops, with the aircraft also capable of supporting combat search and rescue tasks. Other duties could range from customs and border protection to marine surveillance and coast guard use, the company says.

PZL Mielec also is offering the new variant to Warsaw, should its plans to acquire a fleet of Airbus Helicopters H225M Caracals be cancelled. Offset negotiations are ongoing with relation to this procurement.

The armed S-70i will make its first international appearance during next month’s Farnborough air show in the UK.