BAE Systems has stretched the range of its Advanced Precision Kill Weapon System (APKWS) rocket by 30% using a new trajectory.

The capability will come as part of an APKWS block upgrade that will be incorporated starting with deliveries in January 2022, the company announced on 3 August. 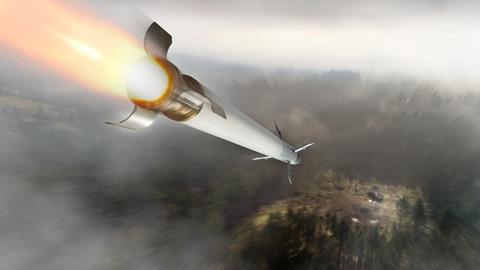 The APKWS rocket’s range is to be stretched

The APKWS is based on the Hydra-70 unguided 70mm (2.75in) rocket. It has a distributed-aperture semi-active laser seeker and a self-contained guidance and control system, installed between the warhead and rocket motor. When launched from a helicopter, the guided rocket has a maximum range of 2.7nm (5km) and hits targets 80% of the time within 2m (6.6ft), claims BAE.

The company does not disclose the new range, but 30% beyond the APKWS’s current helicopter-launched maximum range would allow it to hit targets about 0.8nm farther, for a reach of 3.5nm.

The lengthened range is intended to help pilots “engage targets from a greater stand-off distance with improved survivability”, says BAE.

BAE pitches the APKWS as a capability between unguided rockets and anti-armour munitions, such as Lockheed’s AGM-114 Hellfire missile. The company says the rocket is a low-cost option for attacking targets such as un-armoured or lightly armoured vehicles.