Bell Helicopter used the Bahrain International Airshow to promote the capabilities of its AH-1Z to the nation’s military, which already operates the manufacturer’s legacy Cobra attack rotorcraft.

The Royal Bahraini Air Force has a long-held requirement to replace its aged fleet of 30 AH-1s (below), and late last year formally requested information on the availability of the Z-model “Viper”. 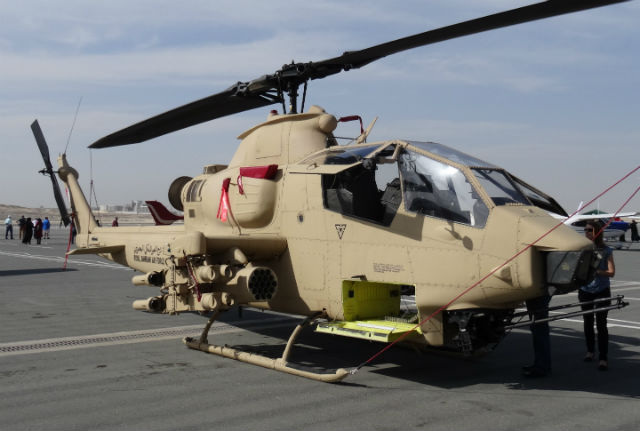 “An LoR [letter of request] for LoA [letter of acceptance] was submitted last October,” confirms Bell’s military business development manager Scott Clifton. While this marks a relatively early stage in any potential procurement sought through Washington’s Foreign Military Sales mechanism, he adds: “Everything from the US government so far is positive.”

Bell – which produces the AH-1Z and 85%-common UH-1Y utility helicopter for the US Marine Corps – has so far secured one international customer for the former. Pakistan early last year concluded a roughly $950 million deal to buy 15 examples for its army.

Referring to the sales opportunity in Bahrain, Clifton notes: “They are familiar with Bell products, and we would create an entire system to ensure customer success on day one.” This would include personnel training, in-service support and spare parts. Beyond its status as a Cobra user, the nation’s air force would also benefit from fielding an attack helicopter optimised for use in a saltwater environment, he adds.

“There is another Gulf state that is interested – and their interest helps Bahrain,” Clifton says, without identifying the nation in question. Existing operators of the legacy AH-1 in the region include Jordan.

Clifton describes the AH-1Z as the leading candidate to meet Bahrain’s needs, but tells Flightglobal: “They have their options open.” The nation has also shown interest in the Turkish Aerospace Industries-developed T129, which appeared at the same show in 2014.

Neither of the candidates was brought to the 21-23 January event – staged at Sakhir air base near Manama – but Bell’s exhibit included a simulator for the combat-proven type.

Flightglobal’s Fleets Analyzer database records Bahrain as having 22 AH-1E/Fs, plus eight P-model examples assigned to a training role. It is unclear how many replacement aircraft it is likely to seek.