Bell has struck agreements with nine aerospace firms to supply parts, software and services for its 360 Invictus helicopter, the company’s prototype submission for the US Army Future Attack Reconnaissance Aircraft (FARA) programme.

Bell and its team have to move quickly to build the first prototype, as the US Army expects to see examples of FARA flying by the fourth quarter of fiscal year 2022. The other aerospace manufacturer in the competition, Sikorsky, has yet to announce suppliers for its Raider X helicopter prototype submission. Both companies were selected in March 2020 by the US Army to build competing aircraft. 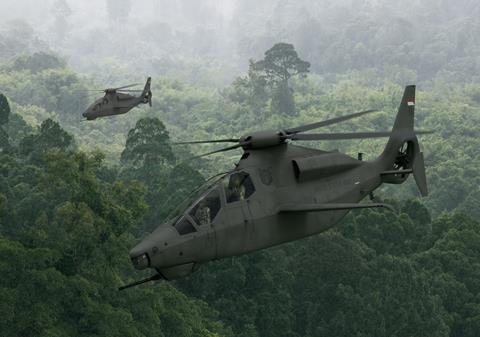 Collins Aerospace: will integrate avionics hardware and software, as well as mission systems.

GE Aviation: will provide the T901 turboshaft engine, a 3,000hp (2,240kW) powerplant that the US Army has chosen as the future turbine for the aircraft that wins the FARA competition. The company is also integrating the aircraft’s Health Awareness System.

L3Harris Technologies: will provide the Wescam MX-15D, a stabilised multi-sensor, multi-spectral imaging and targeting camera to be placed on the nose of the helicopter.

Mecaer Aviation Group: will provide for a tail dragger landing gear system that is fully retractable to enable better aerodynamics.

Bell’s 360 Invictus is a conventional helicopter with a short wing to provide lift and an auxiliary power unit to help meet the US Army’s minimum cruise speed of at least 180kt (333km/h).

The US Army wants FARA to replace its Bell OH-58 Kiowa Warrior helicopter, retired in 2017, as its scouting and light attack rotorcraft. The next-generation reconnaissance aircraft is to be designed, built, tested, flown and fielded to the service’s first unit by 2028.