Boeing was awarded a contract worth up to $1.17 billion to produce and deliver 22 F/A-18E and 6 F/A-18F Super Hornets for the government of Kuwait by 2022, the US Defence Department announced on 30 March.

State Department approval of the sale of F/A-18 Super Hornets to Kuwait was first announced in November 2016, with the country requesting a total of 40 Super Hornets, including 28 fighters for initial delivery, plus the option to order 12 more. Boeing was to provide Raytheon APG-79 active electronically scanned array radars and 20mm guns for the jets, per the original sale announcement.

“The acquisition of the F/A-18E/F Super Hornet aircraft will allow for greater interoperability with U.S. forces, providing benefits for training and possible future coalition operations in support of shared regional security objectives,” the Defense Security Cooperation Agency said when the arms deal was first announced. 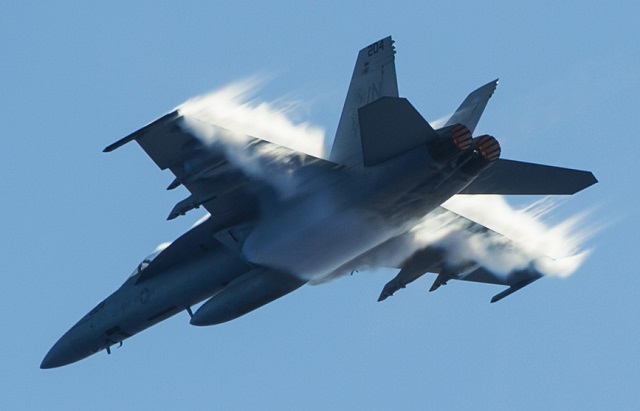 The F/A-18E Super Hornet is a single seat version of the fighter, while the F/A-18F has two seats in tandem.

Orders for the fighter have increased recently, as Congress topped off the US Navy’s request list with 10 more Boeing F/A-18 Super Hornets, worth $739 million, in March. In all, the Navy is buying 24 Super Hornets for a sum of $1.8 billion in fiscal 2018. The additional orders from the US military, as well as Kuwait, have prolonged the life of Boeing’s F/A-18 production line in St. Louis, Missouri.

Work on the Boeing F/A-18 Super Hornets for Kuwait will be divided mostly between St. Louis, Missouri (47.2 percent); Goleta, California (22.3 percent); and El Segundo, California (20.1 percent), according to the award notice.