Ottawa plans to refurbish its fleet of 85 Bell CH-146 Griffon utility helicopters to extend the aircraft’s life until at least 2031.

The Royal Canadian Air Force (RCAF) said that Bell Helicopter Textron Canada will be undertaking the design and development work necessary to upgrade the helicopter’s avionics systems, engines, cockpit displays and integrated sensor systems. Pratt & Whitney Canada says it has been selected to replace the engines on the fleet with its PT6T 9 TwinPac, which is equipped with an engine electronic control system. The design and development work is valued at up to C$90 million (US$67.4 million) and will be performed under the existing support contract for the CH-146, which was awarded to Bell in 2011, says the government.

Once the initial design phase is complete, a separate contract is expected to be awarded to begin the life extension work in 2022, says the Ottawa. The overall value of the Griffon Life Extension programme will be about $800 million (US$600 million).

“A tactical transport helicopter capability is absolutely critical to the success of the full range of military operations,” said Harjit Sajjan, minister of Canada’s Department of National Defence. “With these upgrades, we are ensuring that our military can continue to rely on this proven helicopter for years to come.” 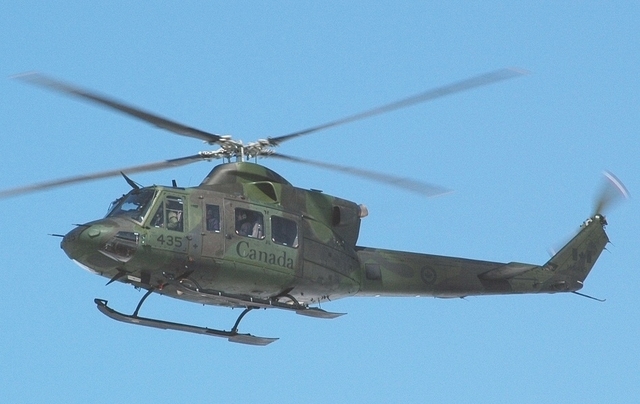 In addition to aircraft based in Canada, the defence ministry says five CH-146 Griffons are deployed on Operation Presence in Mali, a peacekeeping mission, providing an armed escort for the country’s CH-147 Chinooks during medical evacuations and transport of troops and supplies. The aircraft are also deployed as transports as part of anti-Islamic-State mission Operation Impact in Iraq, and operate as close-fire support and tactical transports for the RCAF mission in Afghanistan.

The aircraft is based on the commercial Bell 412 helicopter, a modern version of the Huey helicopter, which has twin turbines and a composite four-blade main rotor. It can carry up to 15 people (two pilots, a flight engineer and 12 passengers), has a maximum gross weight of nearly 5,400kg (11,905lb), and can reach speeds up to 140kt (260km/h).

The RCAF’s Griffon fleet has an average age of 21.7 years, according to Flight Fleet Analyzer. While extending the aircraft’s life until at least 2031, Canada says it will start looking for the next generation of tactical utility helicopters.