The Royal Navy’s amphibious support helicopter transition from the Westland Sea King HC4 to the AgustaWestland Merlin HC4/4A has taken a significant step forward, with the return of its 846 Naval Air Squadron to RNAS Yeovilton in Somerset.

Six as-yet unmodified Merlin HC3/3As – two of which still sport their original Royal Air Force markings – arrived at the Commando Helicopter Force’s (CHF’s) home base on 26 March from RAF Benson in Oxfordshire, where RN personnel have been in training over the past three years to operate the type. 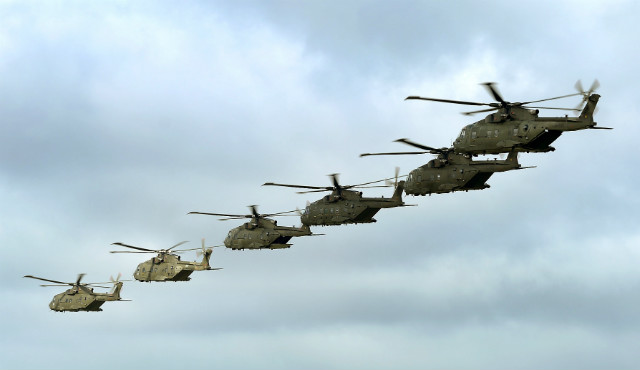 “The immediate future will see the squadron maintaining a very high readiness posture for contingent operations around the globe, and being at the forefront of a force-wide reinvigoration of expertise in the maritime environment,” says 846 NAS commanding officer Lt Col Derek Stafford. The latter activity will involve the unit’s involvement in the multinational Joint Warrior exercise in the UK in the coming weeks, while its crews have already been involved in exercises in Jordan and Norway. 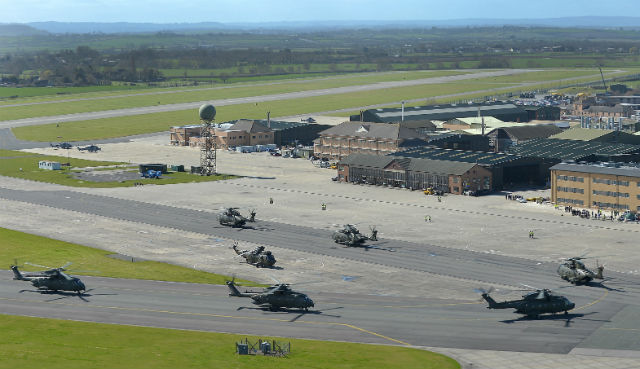 Growth of the RAF’s Boeing CH-47 Chinook fleet is enabling the service to transfer its 25 Merlin HC3/3A transport helicopters to the CHF. A second unit – 845 NAS – will also be equipped with the upgraded HC4/4A at Yeovilton, and will be stood up at Benson in May, in place of the RAF’s 28 Sqn. It is due to transfer to the Somerset base in 12 months’ time, by which time the Sea King HC4 fleet will have been retired.

Modifications to the Merlin airframe will include the installation of a folding tail and folding main rotor blades, as well as a modified undercarriage to enable deck-based operations.

Meanwhile, the UK Ministry of Defence has signed a £580 million ($860 million) contract with AgustaWestland covering the third phase of its 25-year Integrated Merlin Operational Support arrangement with the company. The latest availability-based award – which also covers the RN’s Merlin HM1 and HM2 rotorcraft – will run from 1 April to March 2020.