Leonardo Helicopters is making steady progress with its AW609 tiltrotor and expects to achieve US Federal Aviation Administration this year, with first delivery following in 2020 and military approval in 2021.

The AW609 is attracting interest from several branches of the Italian military, as well as undisclosed armed forces in the Middle East, said Gian Piero Cutillo, managing director of Leonardo Helicopters, at a HAI Heli-Expo press briefing on 4 March.

“I think we’ve made a lot of progress. We now see the light at the end of the tunnel,” he says. “We are now focusing on delivery next year of the first 609. We are getting a number of interested [parties], not only civil, but parapublic and the military.”

If all goes according to plan, military certification for the tiltrotor is possible by 2021, though the date could slip should unforeseen issues arise, he says. 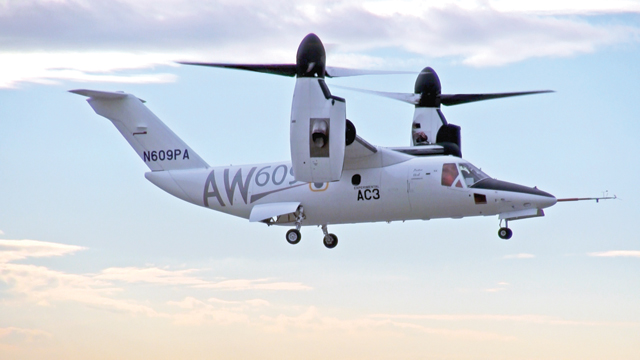 Leonardo plans to deliver its first production AW609 (aircraft number 5) to an undisclosed operator next year and its second production tiltrotor (aircraft number 6) to the Era Group. The other announced customer for the aircraft is the United Arab Emirates Joint Aviation Command.

The manufacturer also announced that it signed a memorandum of understanding with Nakanihon Air Service of Japan to establish a joint working group that will study requirements for introducing the AW609 into commercial service. The companies will examine using the aircraft for aero-medical services, disaster response and television news operations.

Despite previous suggestions that the AW609 could be used to ferry workers to offshore oil and gas rigs, Leonardo’s Roberto Garavaglia, senior vice-president of competitive analysis and strategy, says that will not be the aircraft’s target market.

“Oil and gas was never going to be the main market for the AW609 because it lacks the number of seats that you typically need,” he says, noting that the aircraft’s nine-passenger capacity is not sufficient for it to be cost effective in crew-change operations.

“The core market is going to be parapublic missions, which include search and rescue. Some of them are going to be offshore related, but are not uniquely related to the oil and gas-specific operations.”