Leonardo has acquired the remaining shares of Sistemi Dinamici from IDS of Italy, providing it with full ownership of the SD-150 Hero unmanned helicopter programme.

Pisa-based IDS had held 60% of the Sistemi Dinamici joint venture, but on 23 December handed over full control to Leonardo. This, the latter says, will bolster its unmanned air vehicle portfolio, which also includes the SW-4 Solo unmanned helicopter and the Falco fixed-wing tactical system.

Mauro Moretti, chief executive and general manager of Leonardo, says: “This acquisition is a testament to the quality of our investments in the field of unmanned systems, a sector with high added value in which Leonardo is a leader in Europe. Thanks to a defined investment strategy, our portfolio is further enriched, making Leonardo even more competitive and ready to meet the future challenges in advanced technologies.”

The Sistemi Dinamici joint venture was formed in 2006 to focus on a number of key vertical take-off and landing technologies. In addition to rotary-wing UAVs, this also included fly-by-wire controls and helicopter flight mechanics. 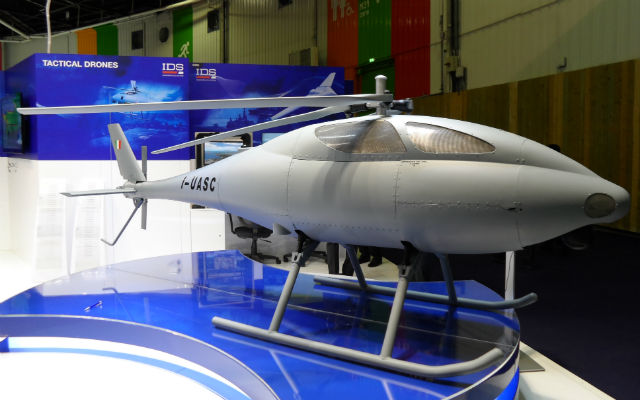 The Hero has a 5h endurance and a 15kg (33lb) payload, and integrated sensors for the UAV include an active electronically scanned array radar and an electro-optical/infrared sensor payload.

Leonardo’s Sage electronic support measures system and a communications relay capability are further options for the aircraft. The design has been used for testing with the Italian armed forces, but is not known to have secured any firm customers to date.