Maiden sortie of CityAirbus 'within weeks'

Airbus Helicopters is closing in on a first flight for its CityAirbus electrically powered urban air taxi, with the milestone expected within weeks.

A maiden sortie had been scheduled for late 2018, but the manufacturer decided "to go a bit slower" because of the complexity of systems integration, said Marius Bebesel, head of the City Airbus programme, speaking at the manufacturer's Donauworth, Germany plant on 19 February.

"On a vehicle level we are ready to go, it is more about the ground station and monitoring – it has been a bit more fine-tuning than expected," he says.

Ground run speeds of its eight contra-rotating propellers have been progressively increased, says Bebesel, with the most recent tests taking them to 750rpm; around 1,000rpm is required at take-off.

"We have two more weeks of ground runs and then we will do a first take-off here in Donauworth," says Bebesel.

"Then to open up the flight envelope, we will move to Manching [Bavaria]. We would like it to be quicker, but we need to go through ground tests step by step."

Initial sorties will be controlled by a pilot from the ground station, while in future, autonomous flights are to take place, with the vehicle following a series of pre-planned waypoints.

Although a ducted fan design, with two pairs of 2.8m (9ft 2in)-diameter propellers per pod, the upper of the two sits noticeably above the carbonfibre duct itself, which is also a relatively narrow structure.

Bebesel says the design has proved "very efficient" with "tremendous efficiency" in the hover; the aerofoil profile of the duct also generates about 400kg (880lb) of lift, he says. 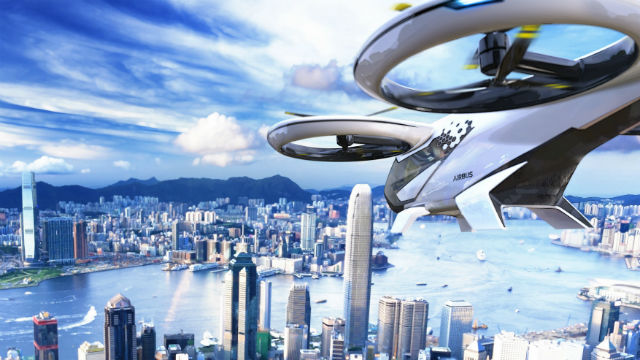 However, in future, some modifications to the design of the ducts or fixed-pitch propellers may be necessary to improve efficiency in forward flight, Bebesel says.

One change already being evaluated is a switch from wood to carbonfibre propellers. The components currently fitted to the prototype have been developed by Germany's MT-Propeller, but Airbus Helicopters has already produced a set in composite.

These have been installed on a "whirl tower" test cell and should be "more efficient and light weight" than the wooden components, says Bebesel, despite pointing to the "more forgiving" nature of the current material.

Bebesel says the propulsion architecture – comprising four batteries, four electrical distribution boxes and eight direct-drive electrical motors – will be able to cope with the failure of up to two motors; additional failures are considered statistically improbable, he says.

"It is like saying what happens if you lose the steering in your car? It never happens," he says.

Maximum take-off weight for the CityAirbus is 2.2t and it is designed to carry four passengers.

"You need to stay around two tonnes to have enough passengers on board to be profitable, and on the other side, to be light and efficient enough," Bebesel says.

CityAirbus is one of two urban air mobility projects being pursued by the company, with the Vahana tilting wing design, produced by the company's A3 Silicon Valley offshoot, already flying.

Airbus has yet to commit to taking either architecture forward as a commercial product.