Bristow’s now completed merger with its US counterpart Era Group could trigger a wave of consolidation in the offshore helicopter industry, the company’s new boss believes. 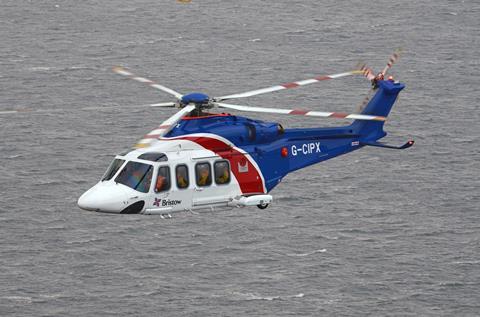 Merged company will use Bristow name and livery

Speaking to FlightGlobal on 15 June, Bradshaw said that the challenging conditions in the oil and gas market on which the helicopter providers depend makes it more likely that “there will be further consolidation”.

The same “rationale” that drove the Bristow-Era tie-up applies in other geographies such as the North Sea or Brazil, says Bradshaw: “The market is not big enough to sustain the number of operators that exist today.”

Although the oil and gas sector has plunged into crisis since the merger was announced in January, Bradshaw says he never felt it was in danger of collapse, instead becoming “more compelling”.

“By coming together we are becoming a larger, more diversified, financially stronger company,” he says. Era brings a “very strong balance sheet”, while Bristow – post Chapter 11 restructuring – is also relatively stable, plus boasts consistent revenue from a large search and rescue contract it runs on behalf of the UK government.

Combined, the business has a fleet of around 300 helicopters, and is the largest operator of a number of types including the Leonardo Helicopters AW139 and AW189 intermediate- and super-medium-twins, plus the Sikorsky S-92 heavy-twin; more than 80% of the fleet is owned.

Bradshaw says that the fleet will likely decrease slightly over the coming years as Bristow sheds legacy Bell types including the 212 and 412, along with older S-76s. He declines to give a specific number, “as this will be informed by how demand shakes out”.

The operator also retains “flexible” orders for both the AW189 and medium-twin AW169, but their arrival will depend on demand.

Bradshaw believes the latter to be ideally suited for offshore windfarm support work as that market develops in the USA, which “is coming in a couple of years”, he says.

Although not mentioned in any of its recent stock market filings, the company remains the launch customer for the AW609 civil tiltrotor.

Era originally signed as a customer in 2018 with an order for two examples; it had two years earlier agreed to collaborate with Leonardo Helicopters to assist with the development of an emergency medical services (EMS) variant. Bristow too was working with the manufacturer on the AW609’s potential for long-range offshore missions.

“When the aircraft is ready we are looking forward to that partnership with Leonardo,” he says. “We will be the launch customer.”

However, Bradshaw says the focus for the AW609 will on EMS and VIP transport missions where it has a “unique offering”, and not oil and gas support where it is “not a great fit”.

Bradshaw believes the combined business can realise around $35 million of synergies within 12-24 months, for example through the consolidation into a single air operator certificate in the USA, plus back-office functions such as IT.

Although repainting the aircraft is “not a priority”, says Bradshaw, it will be done as helicopters come up for heavy maintenance.