Nigeria's air force has expressed an interest in acquiring the Textron AirLand Scorpion strike and surveillance aircraft in order to counter the Boko Haram Islamist insurgency in the country.

The service currently operates both dedicated strike and surveillance types – the Chengdu F-7Ni and ATR 42, respectively – but believes that a low-cost aircraft with a dual capability would enable quicker and more precise counter-insurgency operations.

“In my country, we want and need this,” AVM RA Ojuawo, director of operations representing CAS, Nigerian air force headquarters, told the International Fighter conference in London on 18 November. “We want this equipment, but are they going to give it to us?”

Ojuawo says Abuja will soon put in a request to the US government for the sale of up to a squadron’s worth of aircraft. However, it worries that approval may not be granted, based on the previous rejection of its appeal for Bell Helicopters AH-1 Cobra rotorcraft.

“It is going to take the international community to fight insurgency, and the only way to do that is to give [countries] the technology that they need,” Ojuawo says. 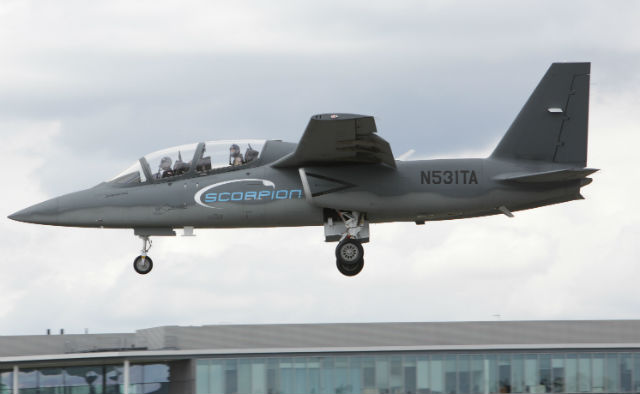 “The nature of warfare has changed…but air power remains important against irregular warfare, and the importance of air power in the contemporary environment is increasing,” he adds. “We as a nation and as an air force are having a rethink.”

The rise of al-Qaeda-linked Boko Haram has increased the threat of insurgency in Nigeria. However, the F-7 combat aircraft are unable to carry precision-guided munitions and are therefore poorly suited for counter-insurgency strikes in urban environments.

“We are really handicapped in targeting the enemy where they are,” Ojuawo says. Equally, the ATR turboprop is unarmed, and therefore while it can detect insurgents, there is a delay before strike aircraft can be brought on station.

“The ATR will see the enemy, know its position, but can’t do anything about it,” he adds. “We have to fight the way the enemy is fighting and find him where he is.”