Helicopters and fixed-wing aircraft from seven NATO and Partnership for Peace countries took part in a major multinational personnel recovery exercise that concluded in Europe earlier this month.

Running from 22 May until 6 June, the air-centric personnel recovery operators course (APROC) event was hosted by the Netherlands Defence Helicopter Command, and involved almost 600 participants from a total of 12 nations. 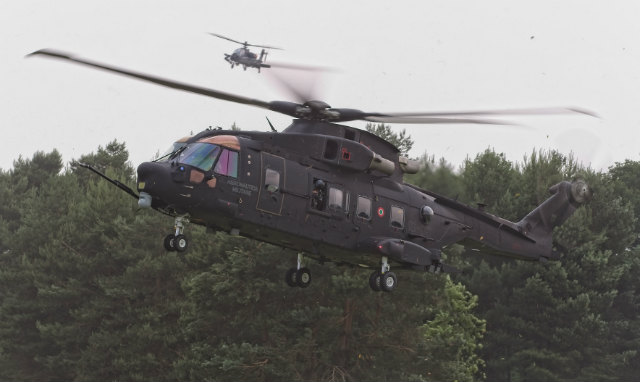 The Italian air force's combat search and rescue-optimised HH-101A Caesar took part alongside the Italian navy's baseline AW101, while Poland committed the Mil Mi-24, and Spain the Airbus Helicopters AS332. 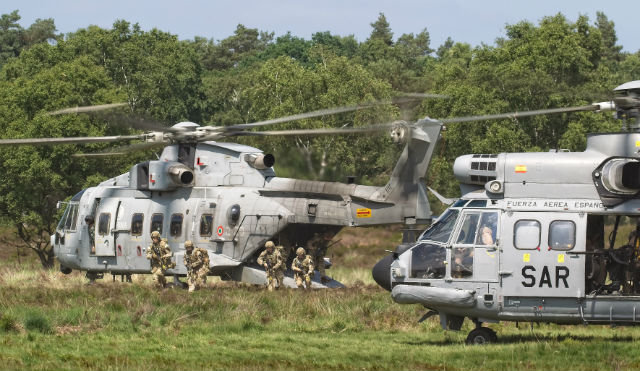 Escort missions were flown by Royal Netherlands Air Force Lockheed Martin F-16AMs and Eurofighter Typhoons of the Italian air force. The exercise was a practical next step for Italian pilots, following their completion of a theoretical course on joint personnel recovery held in Guidonia, Italy. Rome's Eurofighters are due to assume this role after the future withdrawal of its Alenia/Embraer AMX strike aircraft.

Organised by the European Personnel Recovery Centre, the annual APROC activity is part of a long-term effort intended to improve the preparation, planning, execution and adaptation of such missions, by developing and harmonising policy, doctrine and standards among partner nations.

Following two days of academic courses, aircrews conducted a familiarisation flight over the Netherlands, before taking part in eight days of realistic scenarios at locations in the Netherlands and Belgium.

All operations were carried out under daylight conditions, because "some restrictions were in place for performing night flying operations for some participants", according to exercise commander Lt Col Bart Holewijn.