Boeing and the US government have signed a contract for the provision of 24 AH-64E Apache rotorcraft to Qatar.

The Defense Security Cooperation Agency notified Congress in 2014 that an authorisation had been granted to provide 24 of the type to Qatar, and a $667 million contract was signed on 7 June.

In addition to the aircraft, one Longbow radar crew trainer will also be provided, plus ground support equipment and Thales radios. Deliveries will commence in 2019, and the contract will complete in May 2020, Kim Smith, vice-president of attack helicopter programmes at Boeing, told media in Phoenix, Arizona on the day of the deal being signed.

"We're very proud and have had a relationship with the Qataris for some time," Smith says. "This is another significant accomplishment for the E-model."

The deal comes ahead of a planned five-year multi-year contract, which Boeing is hoping to sign in fiscal year 2017. The manufacturer is working with the US Army to accelerate the agreement of such a deal, which would cover the production of 275 aircraft – plus options to ramp up to 450 to support potential export deals – between then and FY2022.

The company is targeting the “second quarter of FY17” for the multi-year signing, which would fall between January and March 2017, but says it is hopeful that this can be brought forward.

Lot 4 AH-64E Apaches are currently in production, and current contracts cover development through to Lot 6, before the proposed multi-year deal would come into effect. Boeing says 257 AH-64Es will be produced ahead of the number that fall under the sought new arrangement, and notes that a second multi-year contract to take it to a total of 690 examples is expected to follow. 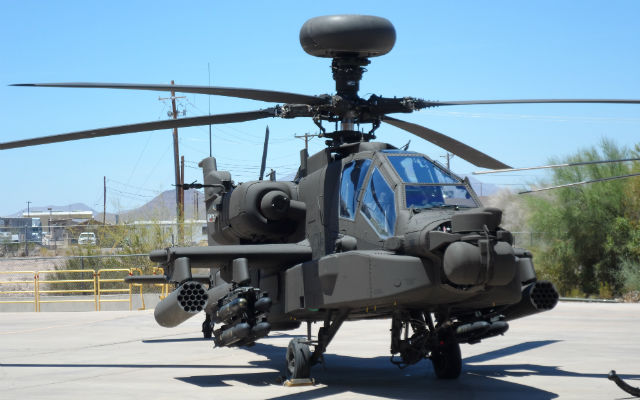 Customers of the E-model include the US Army, Indonesia, Saudi Arabia, South Korea and Taiwan, although Boeing cannot confirm the latter.

There are a number of expected future customers of the E-model Apache, including the Netherlands, which now operates 28 D-model variants. The operator is expected to remanufacture its fleet, and not purchase new-build aircraft, Mark Ballew, director of attack helicopters at Boeing, says.

Ballew expects certain customers – including the Netherlands – to wait for the multi-year agreement, in order to benefit from the cost savings that it will provide.

Other tangible future deals for the type include Poland and the UK, with the latter in the process of choosing between an upgrade of its current Apache AH1 fleet, or the acquisition of new-build AH-64E. A request linked to the latter option has previously been approved by the US government.

Poland, meanwhile, is considering the type to fulfil its Kruk attack helicopter programme, a decision on which is expected during 2017. Boeing signed a memorandum of understanding with Polish company PGZ in 2015, and a number of others are in discussion.