To be operated from its mountain bases, they will replace a current fleet of Leonardo Helicopters AW109SPs from 2024. 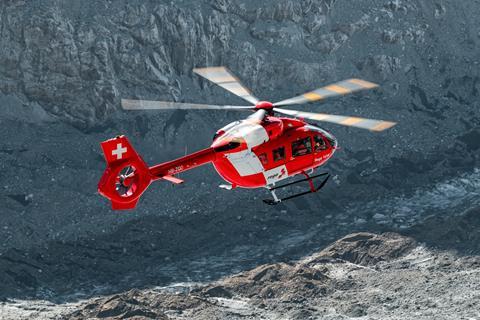 By 2026, Rega will operate an all-Airbus fleet consisting of 21 five-bladed H145s. A single unit (HB-ZQO) from the March order – replacing lowland-based helicopters – is already in service, having been delivered in May this year, Cirium fleets data records.

“By selecting the five-bladed H145, we are ensuring that Rega will continue being able to provide its patients with reliable and professional medical assistance by air for the next 15 years,” says Ernst Kohler, chief executive of Rega.

Rega says it is investing Swfr200 million ($214 million) in the replacement and extension of its fleet. It plans to sell the AW109SPs, which were acquired in 2009, when they are retired from service, alongside its seven four-bladed H145s.

The H145s will come equipped with a new navigation system combining input from multiple sensors into the Garmin flight-management system. Airbus Helicopters says even in the event of GPS signal loss, the helicopter can be navigated safely thanks to Thales’ inertial navigation system.

In September, Rega and Leonardo Helicopters announced they had abandoned development of an “all weather” AW169 medium-twin, equipped with a full ice protection system and cancelled a three-unit order for the type.

Rega had also previously signed to retrofit its older H145s with the new five-blade main rotor, but dropped that plan in March due to delays to the upgrade programme.