The company says it remains on track to achieve certification of the 9.1t super-medium-class helicopter in 2017, with three more developmental 525s coming online in 2016.

The third example is already in the final stages of assembly at Bell’s plant in Amarillo, Texas, and programme vice-president Larry Thimmesch says in a statement to Flightglobal that he expects delivery in the first quarter of 2016. 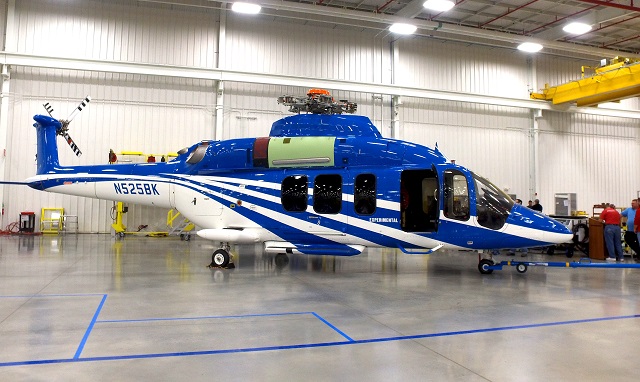 FTV-2 prior to rotor blade installation.

An ambitious project for the company, the GE Aviation CT7-powered 525 is the first commercial helicopter to leverage full fly-by-wire controls. Upwards of 70 letters of intent for the 525 have reportedly been signed and the first production delivery is planned for 2017.

FTV-1 took its maiden flight in July, and the second aircraft will fly soon.

“The flight test team has implemented the main rotor blade installation and motion and instrumentation calibration and has begun to conduct ground runs with first flight quickly following,” says Thimmesch.

The 525 recently reached its predicted not-to-exceed speed of 165kt (305km/h), and advertises a range of 500nm carrying up to two flightcrew and 16 passengers. The maximum capacity is 20 passengers, or that number can be trimmed to accommodate plush interiors, according to Bell.

Introduced in 2012, the rotorcraft is targeted at the commercial VIP, offshore oil and gas, and rescue segments and could also be offered for military missions.