Sikorsky sees an opportunity to sell its UH-60M Black Hawk and S-70i/M utility helicopters to replace ageing military fleets in the Asia-Pacific.

The company has received commitments and orders for more than 100 examples of its utility helicopters in the past three years. That could push up its historic sales in the region by approximately 20%, to more than 600 aircraft, says Jon Rudy, Sikorsky regional executive for Asia. 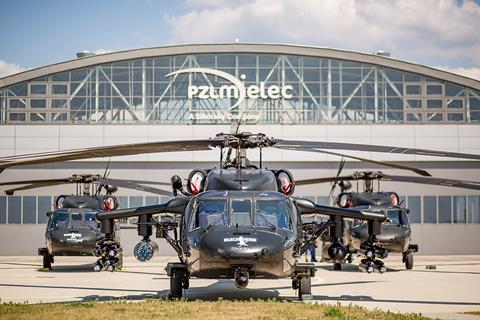 “Since the 1970s, many operators in the region have been flying Vietnam War-era helicopters both in military and civil variants,” he says. “These aircraft are at the end of their lives and are experiencing low availability. They were also designed to perform more specific missions, and yet our world has moved on.”

“The Philippine air force is an excellent example,” he says. “The Philippines is an archipelagic nation requiring a modernised utility helicopter fleet that can provide greater payload and lift capability and range to distant locations than its fleet of [Bell UH-1] Huey derivatives. During the recent relief efforts to bring aid to the areas affected by Typhoon Odette, the air force was able to reach an inhabited island by helicopter for the first time ever.”

In 2019, the Philippine air force ordered 16 S-70i Black Hawks, which were delivered in 2020 and 2021. The Philippine Department of National Defense also recently expressed interest in ordering 32 additional examples.

Other recent deals include an order by the South Korean navy for 12 MH-60R Seahawk aircraft and Australia’s stated intent to order up to 40 UH-60M Black Hawks and 12 MH-60Rs.

Operators have a choice between the UH-60M and S-70i/M, helicopters that have 90% parts commonality, but which are built on separate production lines.

The UH-60M is built in Stratford, Connecticut and sold via the US Army through the Foreign Military Sales process. It comes with specific US Army mission radio and avionics equipment.

The S-70i/M is manufactured by PZL Mielec, Sikorsky’s Polish subsidiary. It can be tailored to a country’s specific mission requirements, says Rudy. The type also comes with additional safety features, such as ADS-B Out, a Terrain Awareness Warning System and a Traffic Alert and Collision Avoidance System.