The US Army plans to grant Sikorsky a sole-source contract to integrate and qualify GE Aviation’s T901-900 turboshaft in its UH-60M Black Hawk utility helicopters, with work starting in fiscal year 2022. 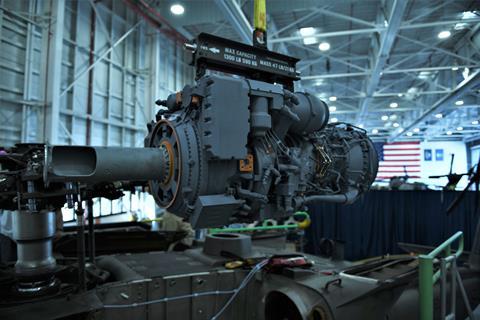 A 3D printed model of the GE T901 engine hangs from a sling, waiting to be installed in an UH-60M as part of a fit check

The US Army is giving Sikorsky a sole-source contract on a cost-plus-fixed-fee basis, it says in a pre-solicitation notice made public on 26 March.

The service will not hold a competition because “the supplies and services required by the agency are available only from the [original equipment manufacturer], Sikorsky,” the notice says. “Sikorsky is the sole-source designer, developer and manufacturer of the H-60 aircraft, and is also responsible for integration of the UH/HH subsystems into the aircraft.”

The contract is planned to be executed between FY2022, which starts in October, and FY2025.

The US Army also plans to use T901s to re-engine its Boeing AH-64 Apache attack helicopters and to power its in-development Future Attack Reconnaissance Aircraft.

The engine is supposed to maintain much of its performance in high and hot conditions, up to 6,000ft and at 35°C (95°F). GE says the powerplant’s modular design will enable easier field repairs, and that the T901 has comparatively lower operation and sustainment costs.