Jetstar Airways has been forced to cancel 90 flights scheduled for this weekend due to planned industrial action by the low-cost carrier’s pilots.

More than 90% of the Australian Federation of Air Pilots (AFAP) Jetstar pilot members voted for four-hour stoppages on 14 and 15 December. AFAP represents 80% of Jetstar’s pilots. 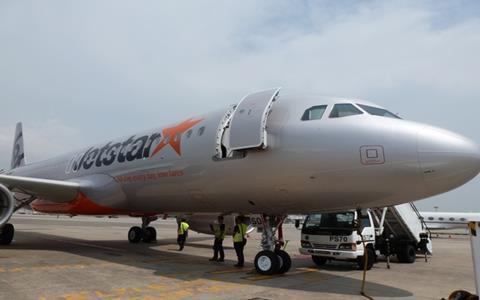 Pilots of Jetstar’s narrowbody aircraft, which primarily serve domestic routes, will not operate flights from their home bases from 05:00 to 09:00 on both days, while pilots operating Boeing 787s on international routes will cease work between 14:30 and 18:30.

44 services have already been cancelled for Saturday and 46 on Sunday, but Jetstar expects around 80% of its flights to operate as scheduled. The airline says it has re-timed flights, upgauged aircraft and transferred some passengers to Qantas flights.

Flights operated by Jetstar Asia, Jetstar Japan and Jetstar Pacific are not affected.

Further industrial action could continue through to 20 December. “We are hoping to resume discussions with the company to reach an agreement so that no further action needs to be taken after this period,” says AFAP executive director Simon Lutton.

Jetstar Group chief executive Gareth Evans says the union is demanding the equivalent of a 15% pay increase in the first year, which would put significant pressure on the airline and could impact fares and future investment in aircraft, technology and destinations.

Jetstar is offering a 3% annual increase. Evans says the airline is committed to reaching a new agreement, “but not at any cost”.