As the CH-47 Chinook’s prime manufacturer, Boeing, looks to a Block 2 upgrade to reclaim the helicopter’s lost payload capability, Honeywell is improving the T55 turboshaft engine to increase its power efficiency by 25%.

The US Army Chinook’s original engine maker is using internal funds to develop an improved compressor that would increase the T55’s engine power - from 4,700shp (3,500kW) to 6,000shp - and reduce fuel usage by 8%.

Honeywell is still in the early development phase but has designed the improved compressor, Tom Hart, vice-president of defence aftermarket Americas, tells FlightGlobal. The company will perform a rig test of a highly instrumented engine during scheduled for November, Hart says. The results of the test will inform the next design phase and a kit upgrade which could be available in the early 2020s.

“The army hasn’t asked for this, we’re taking initiative because we believed something like this could be required,” Hart says. “It’s that same path we’ve done in the past where we’ve increased power to the engine and it’s something the army has taken on.”

Since the Chinook first took off more than 50 years ago, the helicopter has taken on more weight to the detriment of its lift and payload capability. Honeywell is pitching the improved the T55 at the same time Boeing is undertaking a Block 2 upgrade on the aircraft; that enhancement should reach production by fiscal year 2021, with the first unit equipped in 2024.

“Block 2 will maintain that fleet relevance and restore a portion of our payload that’s been eroded over time as we’ve added mission equipment to the aircraft,” Col Rob Barrie, US Army cargo helicopter office project manager told reporters this week. 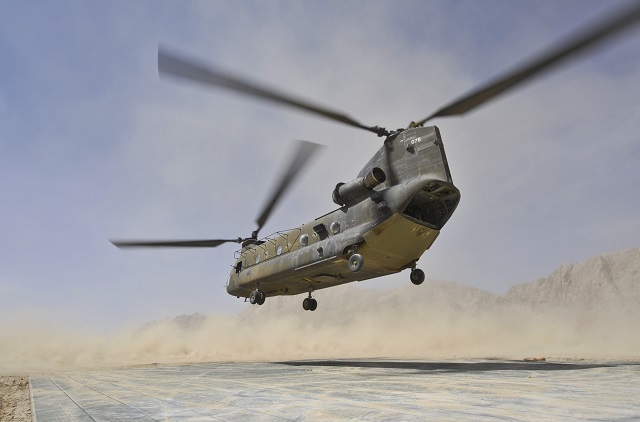 The Block 2 upgrade will also include advanced composite rotor blades which would improve the Chinook’s lift capability. Boeing is completing structural tests of the blades in its laboratory and will later the mount the blades on a Chinook set aside for testing in Mesa, Arizona, Dabundo, Boeing's vice-president for cargo helicopter programmes, says.

Honeywell is not only pitching the engine as a near-term improvement for the army, but as a less expensive option and ready-made alternative to the Future Affordable Turbine Engine (FATE).

“They’ve talked about in Block 3 a FATE engine and that could eventually come but that’s still years away with an engine that’s not yet developed,” Hart says. “This will give the army the opportunity to get an immediate power increase for a fraction of the cost of a new engine.”

The army has selected GE Aviation to develop the FATE engine with a power range of between 5,000-7,500shp. Last month, GE delivered the first full FATE engine to test.