The atmosphere in the Dubai air show briefing room in November 2011 was electric. Journalists occupied every seat and photographers squeezed into the back of the room. Also present were a dozen senior Pakistan air force officials, who were forced to stand along one wall, as well as several Chinese executives in business suits.

The occasion was a briefing about the Chengdu/Pakistan Aeronautical Complex JF-17 Thunder fighter.

Yang Wei, the designer of the JF-17, Chengdu J-10 and China's stealthy J-20, gave a presentation about the JF-17's features and capabilities.

The head of the Pakistan air force used warm words about the aircraft, and commended the close relationship between Islamabad and Beijing.

The good turnout reflected the defence media's love affair with the JF-17 as the successor to cheap, value-for-money Cold War fighters such as the Northrop F-5 and Mikoyan MiG-21. While the new model has yet to make a mark on the world stage, it is the most prominent element in the broader story of China's military aircraft exports.

Although the importance of the JF-17 in China's future export efforts cannot be ­disputed - Pakistani officials take pains to stress the joint nature of the programme - Beijing is quietly trying to sell small numbers of different types of aircraft, including ­advanced jet trainers, utility helicopters and transport aircraft.

The awkwardly named China National ­Aero-Technology Important & Export Corporation (CATIC) is the government-owned ­company tasked with selling China's military aircraft abroad. Over the past 30 years it has sold more than 1,400 aircraft to international customers and boasts 35 representative offices globally.

"In 2011, CATIC's major successes included a follow-up contract for the JF-17 with Pakistan and various contracts for the [Shaanxi] Y-8 transport aircraft, the [Xian] MA-60, and [Harbin] H425 helicopter," says Zeng Wen, vice-president of CATIC.

The company, however, declines to comment on specific deals. So far this year, for example, it has officially announced just a single transaction, the sale of eight Pakistan-made Hongdu K-8P Karakorum intermediate trainer jet trainers to Zambia, which will bring the country's total inventory of the type to 15. In 2011, there were reports of a Y-8 sale to Venezuela, though neither Beijing nor Caracas has officially confirmed them. From time to time emerge sketchy reports of other transactions, usually for a limited number of aircraft, in African or South American nations.

"China is having almost no impact on world markets, except in a marginal way," he adds. "Their niche, if you could call it that, is countries that can't afford anything better. The JF-17 is an obsolete and cheap aircraft, ideal for the Pakistan market, which values numbers over actual combat effectiveness. It doesn't seem to be going anywhere else, and only marginal country markets have been mentioned as prospects - other than Egypt."

The Stockholm International Peace Research Institute (SIPRI) provides a "very rough estimate" of the value of Chinese military aircraft exports. Between 2001 and 2011, it put exports at a ball-park $3.2 billion, an average of $320 million per year. Reflecting sales of the jointly produced JF-17 in Pakistan, its figure for 2010 is $625 million and for 2011 is $611 million, both sharply higher than the $137 million estimate for 2009. By comparison, SIPRI values US military aircraft exports at $45.8 billion for the same period, and Russian exports at $34.7 billion.

"The increase in China's aircraft exports for the last few years... does not represent a major breakthrough because the main client remains Pakistan," says Pieter Wezeman, a senior researcher at SIPRI. "If China sold the JF-17 or the J-10 to another country, such as Egypt or Azerbaijan, then it would be a major breakthrough."

Aside from Zambia, Ghana and Sudan have bought small numbers of a weaponised variant of the K-8. These are relatively small sales, however, and the single-engined K-8 is a modest aircraft by international standards. Other important markets are countries where Western manufacturers are forbidden from selling arms.

"The Chinese have had considerable success penetrating the less expensive end of the market, especially countries that have been isolated from other suppliers by political considerations," says Stu Slade, Far East editor at research firm Forecast International. "They have also established a secure position as an aircraft supplier to cash-strapped users. Their position has been limited by the ageing technical standards of the aircraft they have been willing to export. They are still perceived as being the supplier of 1950s knock-offs, even though that has not been true for a decade or more."

CATIC, in close cooperation with its Pakistani colleagues, appears determined to secure the "breakthrough" that Wezeman speaks of. It has told Flightglobal of its hopes of selling 300 JF-17s over the next five years. So far, only Pakistan has ordered the type, with firm orders for 150 examples, although it has said it could eventually buy up to 200. CATIC says key markets for the jet include Asia, the Middle East, Africa and Latin America.

"CATIC sales and customer support teams are highly motivated and CATIC is looking forward to making the upcoming years fantastic for the JF-17 and its users," says Zeng.

An industry source in Pakistan who is familiar with the JF-17 programme says joint Chinese/Pakistan sales efforts have made "considerable progress" following the type's appearance at Dubai.

Joint marketing efforts at air shows are increasingly reminiscent of those mounted by major Western players such as Boeing, Eurofighter and Lockheed Martin. In addition to detailed briefings, in English, about the aircraft and its capabilities, CATIC and Pakistani officials are happy to give journalists one-to-one interviews. They will also discuss the aircraft over the phone and reply to email queries.

While the JF-17's promoters' public relations and marketing efforts may still lack the slick presentation of the big Western players, they are far more adept at marketing than their rivals in third-world markets, the Russians. Rosoboronexport's air show briefings, conducted in Russian by stern officials, are often short on detail and light on news, while efforts to speak with industry executives can be rebuffed with a swift "nyet". Nonetheless, Moscow has a rich history of exporting fighters, with China heavily reliant on types such as the Sukhoi Su-27 and Su-30. And Russian aircraft have enjoyed success in all the regions in which China yet hopes to gain market share. 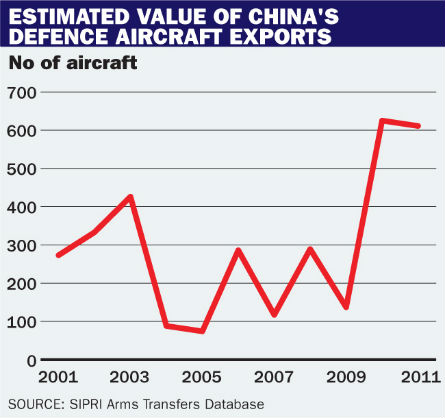 The theme of JF-17 marketing efforts is summed up by a keychain the Pakistan air force delegation passed out to visitors at 2010's Zhuhai air show in China. This lists five selling points: affordable, survivable, flexible, supportable, lethal.

"The focus is on capability at affordable cost," says the source in Pakistan. "Support is assured, the cost is affordable, and there are no embargoes on our side. We have a forum with China to discuss how we construct the sales teams that go into specific countries. We are comfortable partners."

Although it is easy to dismiss the JF-17's capabilities vis-à-vis those offered by more advanced Western types, let alone state-of-the-art aircraft such as the Lockheed F-35 or F-22, on paper it offers a respectable array of systems and capabilities that became common only in Western aircraft in the 1990s. The aircraft can carry a maximum external stores load of 3,600kg (7,930lb), including short- and beyond-visual-range air-to-air missiles. Other weapons and sensors can include the LT-2 laser-guided bomb and WMD-7 day/night laser designation pod, C802A anti-ship missiles and the KG300G SPJ airborne self-protection jamming pod.

"An increasing number of developing countries are likely to welcome the promise of decent-quality Chinese military aircraft at competitive prices," says Andrew Erickson, associate professor in the Strategic Research Department at the US Naval War College.

"Beijing appears willing to offer creative financing and training and other support packages that more established aircraft producers may not offer. Faced with a choice between fewer or no military aircraft and Chinese versions, growing numbers of countries in Africa, the Middle East and Latin America are likely to consider the China option," he says.

In addition, CATIC and Pakistan both appear to be aware of the crucial issue of through-life support for their products. Historically, a major criticism of Russian aircraft is the lack of spares and delays in conducting major repairs. One former Royal Malaysian Air Force logistics officer told Flightglobal at 2011's LIMA air show in Langkawi that it could take one year for a MiG-29 engine to be repaired if were sent back to Russia, adding: "The MiGs are a maintenance nightmare."

When asked, however, why China has yet to secure a sale beyond Pakistan for the JF-17, Erickson says: "This is probably emblematic of the larger problems in Chinese aircraft production and marketing: unproven systems, lack of reliable Chinese-produced engines and uncertain after-market servicing and support. In addition, some countries have larger geo-strategic concerns and relationships that cause them to pursue suppliers other than China."

One area of particular concern he points to is China's weakness in aircraft engines. This could complicate a purchase decision for potential customers. The K-8, for example, is powered by the Honeywell TFE731, a powerplant originally developed by Garrett for business jets, while the JF-17 is powered by Russia's Klimov RD-93.

"In a worst-case scenario, [customers] must worry not only about maintaining good relations with China, but also with Russia. This substantially reduces China's independent leverage in the lucrative and strategically potent area of military aircraft sales, which competitors are loath to cede to China," says Erickson. He believes China will find it particularly challenging to make headway in Russia's "near abroad" of former Soviet republics, with Moscow using its political clout in the region to ensure sales for Russian airframers.

However, SIPRI's Wezeman notes that potential customers for the type tend to have good relations with both China and Russia.

CATIC says six countries have tested the L-15, which it expects to be "exported very soon". Both aircraft types can be purchased with a basic combat capability, offering a degree of flexibility to air forces with limited budgets.

China has also exported small numbers of helicopters, mainly the Harbin Z-9, which is based on Eurocopter's AS365 Dauphin. CATIC says it is suitable for a number of missions, including search and rescue, emergency medical service, medical evacuation, armed patrol and other military and paramilitary operations. "Kenya bought some Z-9s, but only a small number. They have not succeeded in competing with the original supplier," says Wezeman."

Another challenge facing China's military aircraft exports is the larger number of fighters and other systems required to support the rapid modernisation of the Chinese air force at home. "[China's] geographical position means they have to maintain large armed forces, and keeping their own forces up to date absorbs most of their production capacity," says Slade. "Add in the dated and derivative nature of their technology base and it seems as if they will always be one or two steps behind the curve. To a country that doesn't face a top-line threat, this is entirely acceptable, but to somebody facing a sophisticated opponent, it isn't."

Slade believes China could find itself stuck in a relatively unattractive niche of the market - affordable aircraft to cash-strapped customers - that it will have a hard time breaking out of. "Historically, China has always been one of the '10 years time and it'll be a dominant market player' countries and never has fulfilled that projection," he says. 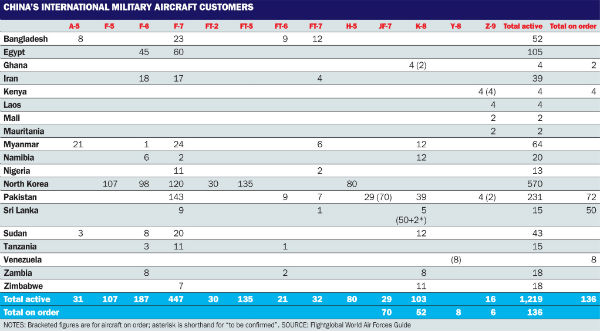 The key, then, is for China - with strong Pakistani support - to secure that first major overseas deal for the JF-17. The goal of selling 300 within five years may seem fantastic, but Beijing and Islamabad are determined.