Higher cabin pressurisation and air humidification levels are heralded as major improvements in passenger comfort made possible by the shift from aluminium to carbonfibre airframes. Boeing and Airbus have different technological strategies to enhance the air quality on board the 787 and A350, but the jury is still out on which will be the more effective approach, and whether a better cabin climate really depends on the fuselage material.

Boeing decided to build the 787 largely from carbonfibre reinforced plastic (CFRP) because of the lighter weight and better fatigue behaviour of composite versus traditional metal. It is this latter point that allows higher fuselage pressurisation - and thus a lower cabin altitude - on regular flights.

Conventional aluminium aircraft can be inflated beyond their operational standards, but the greater structural strain will reduce their lifetime. For the 787, Boeing was able to lower the maximum cabin altitude from 8,000ft (2,440m) on previous models to 6,000ft.

Airbus followed suit by launching the carbon composite A350 in 2006, also targeting a maximum cabin altitude of 6,000ft. The manufacturer had already lowered this ceiling on the A330, A340 and A380 to about 7,500ft, while the A320 family remained at 8,000ft. The upper limit is reached only when the aircraft flies at the maximum cruising altitude of 40,000ft and otherwise stays typically below 7,000ft, says Claire Nurcombe, aircraft interiors marketing manager at Airbus.

But more recent research has showed that lowering the cabin altitude from 8,000ft to 6,000ft will not significantly affect passenger comfort. The UK's Building Research Establishment (BRE) conducted a European-funded laboratory project with Airbus and other partners in 2009, in which a series of 8h flights were simulated with different pressure, temperature, noise and ventilation settings.

The Ideal Cabin Environment (ICE) project concluded that although there was "evidence of combined effects of environmental parameters on subject health and comfort", there was "no consistent evidence of improvement to health and comfort from a decrease in the cabin equivalent altitude". Different pressurisation levels indicated no significant impact on "the development of venous thrombosis, inflammation, respiratory embarrassment or passenger distress", the researchers added.

"The development cycles for new aircraft are not always in line with the research cycles, which the European Commission is funding," says Nurcombe. "The research came out after the decision had already been made to lower the cabin altitude on the A350." But, given the fact that most of the world's population lives within a few hundred feet of mean sea level, she adds: "Lower is always better."

Blake Emery, director of differentiation strategy at Boeing Commercial Airplanes, says the US airframer observed a "knee" in the comfort level curve of its climatic chamber studies with the University of Oklahoma at around 6,000ft, above which symptoms such as headaches and muscular aches appeared.

However, the rate at which the cabin is pressurised appears to have a significant impact on passenger comfort. Nurcombe says this was not part of the ICE project, but Airbus undertook literature studies and then refined the software algorithms controlling the pressurisation systems. The result is that the cabin altitude changes more smoothly and at a different pace than the aircraft's climb or descent rate. If the aircraft climbs towards its cruising level, the pressurisation rate slows as the cabin nears its maximum altitude.

Nicolas Bonleux, executive vice-president of sales and marketing at air management system supplier Liebherr Aerospace, says the technical challenges are twofold: to design software that can calculate comfortable cabin altitude changes, and to develop the components with a quick reaction time.

Surprisingly, the ICE project found that neither ratings by the test participants - 1,400 people with varying health conditions - nor physiological markers showed a "preference between relative humidity conditions". The researchers trialled relative humidity levels of 10%, 25% and 40%, and a floating condition based on a constant moisture content.

But the airframers and humidification system manufacturers are sure cabin air moisture level has an impact on comfort and physiological wellbeing. Both Airbus and Boeing offer active, water-based air humidifiers for the flightdeck and crew rest compartments on the A350 and 787. The fact that most Dreamliner customers have selected this optional equipment for the cockpit - and so appear to think it will benefit pilots - proves there is a need for increased humidity, says Peter Landquist, vice-president sales and marketing at Swedish humidifier specialist CTT.

But it is a different story for the passenger cabin. On any aircraft without active humidifiers, the only source of moisture during cruise is the breathing and transpiration of passengers and crew and vaporisation from hot food and drinks, because at 40,000ft the outside air has a relative humidity of less than 1%. 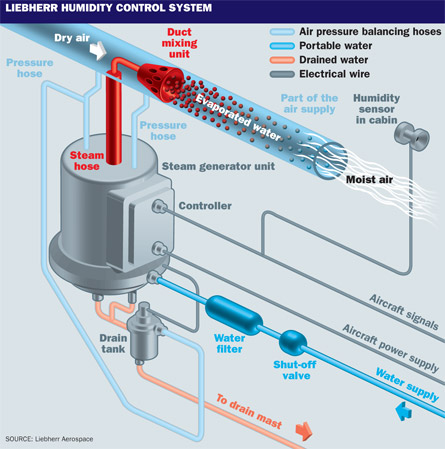 Ironically, the air gets drier with increasing exclusivity because the moisture level depends on passenger density. Relative humidity in economy class is typically between 10% and 15%, but it can drop as low as 5% in premium accommodation, says Landquist.

This is why many widebody VIP aircraft have been equipped with active humidification systems. Relative humidity in natural environments depends on the geographical location and season, but typically varies between 15% in deserts to over 90% in tropical regions.

Boeing has installed an environmental control system on the 787 which manages the air recirculation and use of fresh air better than on other aircraft and maintains 10-15% humidity throughout the cabin, says Emery. He stresses that the system does not add moisture through active humidifiers.

Airbus offers such equipment as an option for first and business class on the A350. Landquist says this will raise humidity to 20% to 25% in those respective areas and could, via the recirculation of cabin air, lift moisture levels in economy class by 3% to 4%. But the water vapour needs to be captured by cabin air drying systems to prevent condensation in the aircraft structure and water accumulation in the insulation mats.

After developing a new-generation air humidifier for business jets about five years ago, Liebherr also wants to introduce the system to passenger airlines, both as OEM and retrofit equipment, says Bonleux.

Corrosion is quoted widely as a reason why humidifiers are not installed on metal aircraft, but this is not the main concern. All aircraft, whether made of aluminium or carbonfibre, suffer from condensation around the airframe structure. As the fuselage skin typically cools to about -25˚C during cruise, the ambient cabin air temperature falls below its dew point and condenses. Concorde was different in this respect because its skin heated up to an average of 90˚C due to air friction, which kept the supersonic jetliner dry.

So far, CTT has supplied zonal driers for about 450 (metal) passenger aircraft to avoid, at worst, "rain in the plane". Although the degree of condensation depends on operational circumstances, Landquist says it is not unusual for a narrowbody to accumulate 200kg (440lb) of water in its insulation material. Boeing installs two zonal driers on the 787 as standard equipment, and the A350 requires such a system because of its humidifiers.

Metal passenger aircraft can be fitted with humidifiers if requested by airlines. Apart from increasing complexity in the crown area above the cabin, which is tightly packed with air conditioning and passenger services systems, the problem with moisturisers is that they require water, which adds weight. Between 50 and 100 litres are typically required to humidify a widebody's premium accommodation on a 10-hour flight, says Nurcombe. "The crucial issue for humidification systems is the extra weight of the water."