INSIGHT FROM FLIGHTGLOBAL: The shifting sands of aircraft values

The concept of shifting sands is probably an apt one for the state of aircraft values today – as winds blow, the shapes and sizes of sand dunes change and move slowly over time. This analogy is more appropriate than talk of cliffs, waterfalls or catching falling knives, as used by some of the more bearish members in our industry.

As we have already discussed before, 2016 was a year in which the industry peaked according to most metrics, and this also holds true for aircraft values. Twin-aisle aircraft values have been in a gentle decline (in some cases a bit steeper) since late 2015 – led by the Boeing 777-200ER. Meanwhile, single-aisles fared better, generally remaining above Base Values, although last year the Boeing 737-800 also started to see some market-driven reductions (after having stellar performance throughout most of its history).

As we entered 2017, all aircraft turned a year older and as such are expected to see some depreciation. The reason this happens in one step change, rather than gradual increments throughout the year, is because every January, production aircraft have a new year of build introduced. New aircraft pricing, which was reflective of a 2016 vintage in December, suddenly becomes reflective of a 2017 vintage and therefore the 2016 vintage must take a step down the depreciation ladder, with a domino effect on all other older vintages.

In the absence of market changes (supply, demand, transactions), this depreciation is expected to be roughly equal to the change in Base Values year on year. However in the case of some aircraft where there have already been multiple market-driven reductions throughout 2016, especially in Q4, we may choose to apply a reduction in January that is smaller than the Base Value depreciation (against the December Market Value). Similarly, aircraft where market activity has hinted at further recent movement at the end of the year may have reductions that are greater than the annual Base Value depreciation.

The first chart shows the range of Market Value movements for some key aircraft types in investor and lessor portfolios from December 2016 to January 2017. 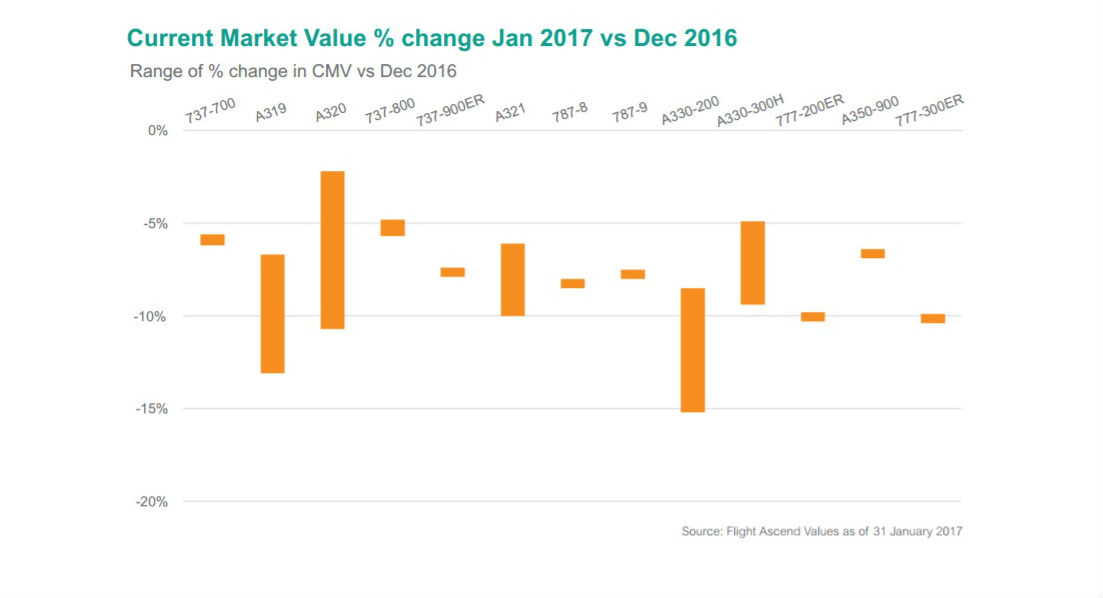 A range is given because different vintages for any given aircraft type may have had different value performance. For instance, younger vintages are more in demand and depreciate less while older ones are under pressure. The chart shows that as a whole, single-aisle aircraft in the left half have fared better than twin-aisle aircraft on the right, as is to be expected given the big-picture narrative.

The data becomes more interesting if we compare the changes in Market Value between this January and a year ago – which highlights clearly where Market Value reductions have exceeded depreciation over the 12 months, as seen in the second chart. 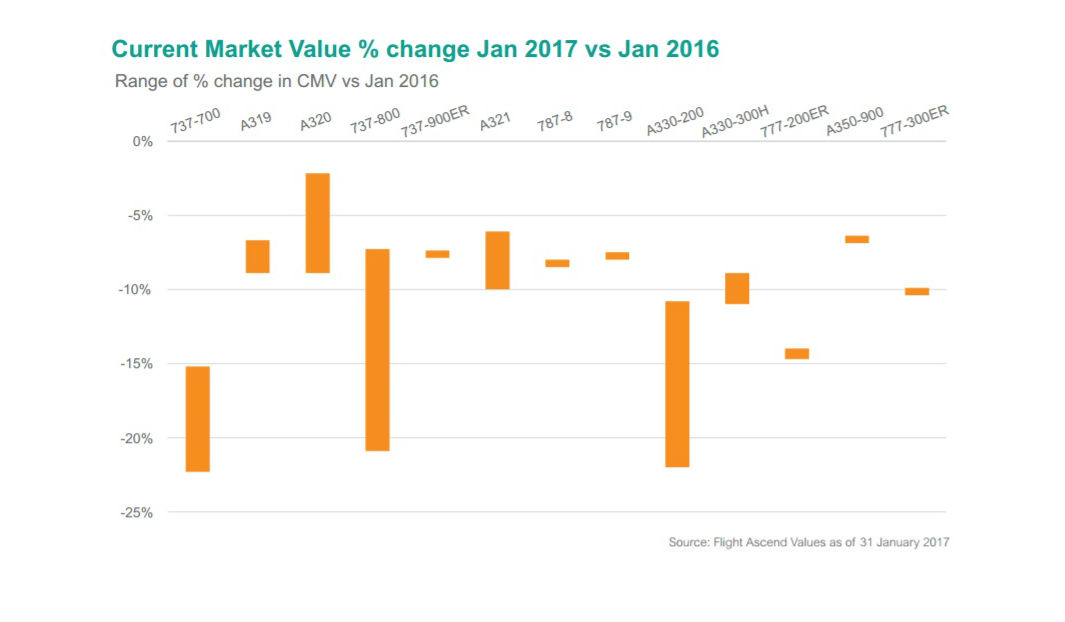 From the same list of aircraft, all of the single-aisle types still have Market Values above Base for a number of vintages, even if marginally, as seen in the third chart. 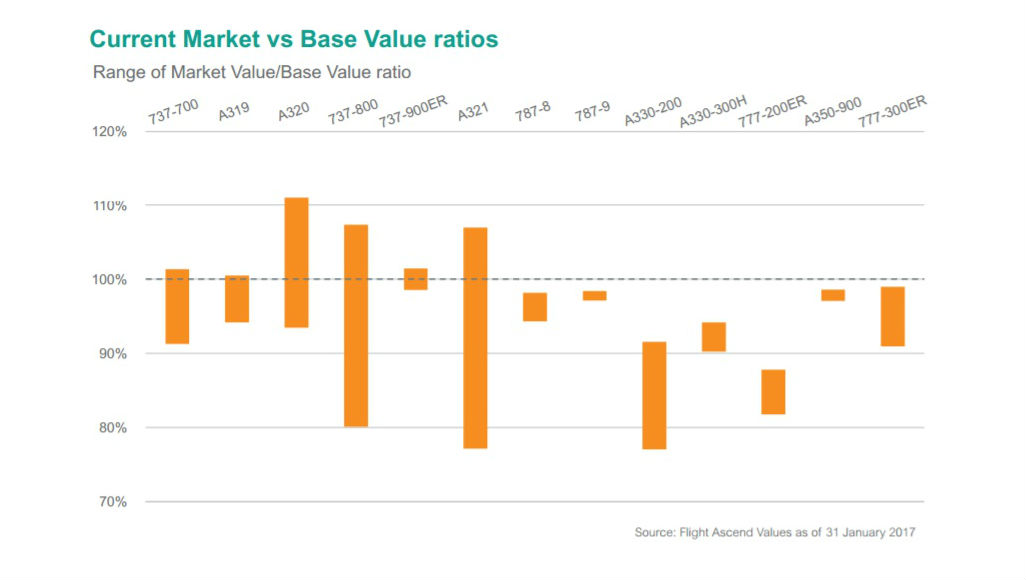 The A320 is the only model where Market Values exceeded 110% of Base (even if just for one or two years of build). Meanwhile the 737-800 and the A321 show the biggest spread of MV/BV ratios, depending on the age of the aircraft. In both cases, older, less desirable examples are up to 20% below Base while younger ones are still above Base. This is due to a multitude of factors, including long production runs, better capability and higher spec of younger aircraft, rising maintenance costs of the older ones, growing production rates, and the presence of part-out buyers at the older end of the spectrum (which tend to bid lower than airlines or lessors).

This brings us to another metric which we believe to be a good bellwether for predicting value movements: the gap between part-out value for a given aircraft type (in half-life condition) and the Market Value of the oldest vintage for that same type. While an aircraft remains in demand, its Market Values tend to remain higher than part-out value. The aircraft teardown companies only start winning bids once no alternative buyers exist (that want to operate the aircraft), and thus the gap starts closing. We decided to measure the size of that gap for the same aircraft types used above, (except the next generation 787/A350) and plot it in the next chart. 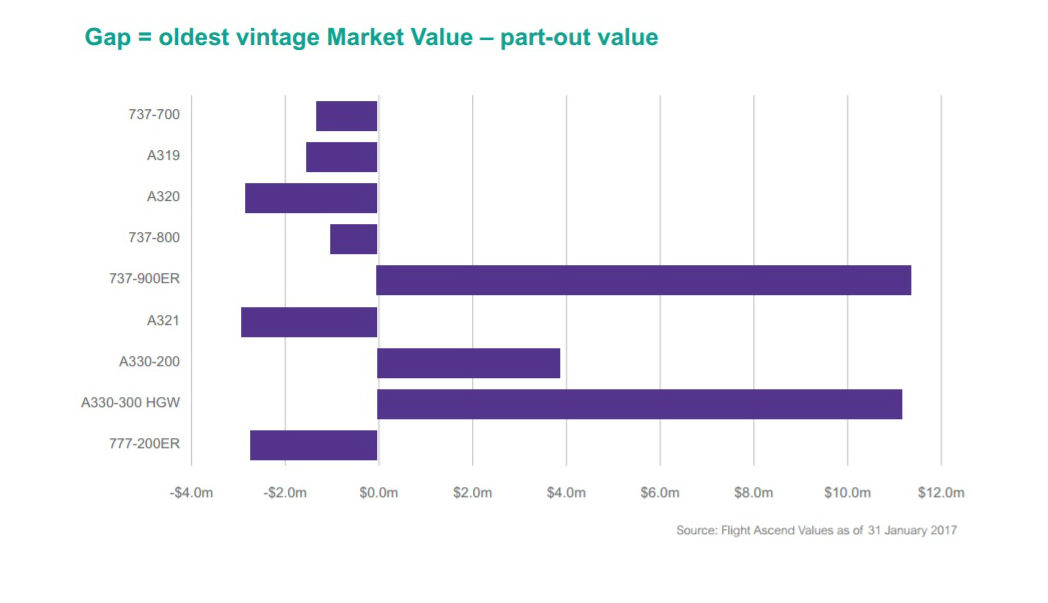 The chart shows clearly that most of the single-aisles and the 777-200ER are in a zone where the oldest CMV is below part-out value. However the A330s and 737-900ER stick out as types where there is still a considerable premium for a flyer over a teardown scenario. We would ignore the 737-900ER at this stage because it is still relatively young in its life cycle, although we expect the gap to close over time.

In the case of the A330s, which have begun to see part-outs – albeit of older, low gross weight examples not represented in this chart – there is still room for Market Values to decrease further as more aircraft are put up for sale if no airline/lessor buyers are found, closing the gap with part-out value.

At the moment the gap is bigger for the A330-300 (HGW), although this model also has fewer aircraft parked or available than its smaller sibling. It is on these grounds that we will be closely watching A330 Market Values over the course of this year.

Aside from the above, we believe the other challenges to aircraft values in 2017 will be increasing production rates, which will boost supply at the newer end and likely nudge some older aircraft (that have lingered around in a lower fuel price environment) out of the system. If we see further increases in fuel price and a sustained strong US dollar, then values for both single- and twin-aisle aircraft have the potential to slide down some more, or if macroeconomic fundamentals are strong, then values may remain stable at best.

George Dimitroff is head of valuations at Flight Ascend Consultancy