When Qatar Airways’ chief executive, Akbar Al Baker, took delivery of his company’s first Airbus A350-900 in Toulouse on 22 December 2014, he did so with a broad smile, happy with the latest addition to the fleet.

However, just days before the initial planned handover date, the ceremony was delayed by more than a week. The reason: problems relating to a supplier of Qatar’s buyer-furnished equipment for the aircraft’s cabin. Al Baker – well known as a stickler for detail – was prepared to postpone a major event to ensure the problem was fixed.

It was an indication of how important cabins are to airlines today; they can both differentiate their product from that of rivals and also act as a positive attraction to customers.

A brief 45min demonstration flight over the Pyrenees to mark the handover showed off the aircraft’s light, airy cabin, in pale grey and Qatar’s traditional maroon. The business-class cabin looked notably more distinctive than those of some Western carriers in terms of seat design, which can appear relatively utilitarian, even in the premium cabin.

The A350’s interior innovations include “dynamic LED mood lighting”, which aims to provide a different ambience at different times of the flight. Colours are cycled to suit the time of day and destination, which is claimed to ease the fatigue of long-haul services. 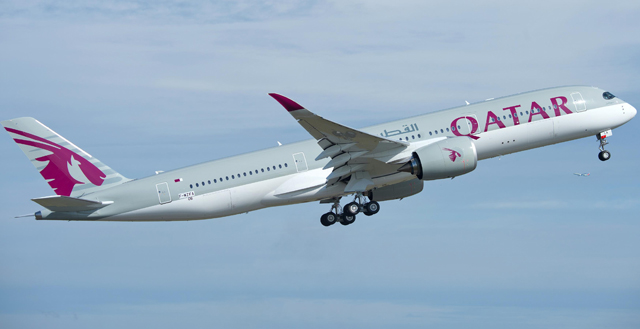 Finnair, which is another early A350 customer, intends to flood the cabin with warm sunset tones when approaching Asia-Pacific destinations. On arriving in Nordic countries, passengers will experience tones designed to mimic the colours of a Scandinavian sky, from effects mimicking the Northern Lights to a clear blue. In all, there are 24 lighting schemes to change the mood.

With Finnair’s first aircraft still on the Toulouse final assembly line, there are only artist’s impressions to go by, but the cabin appears to have a pleasant, cool feel to it, with light tones predominant. The carrier’s 297-seat configuration includes 46 Zodiac Aerospace Cirrus III seats in business class in a 1-2-1 layout, ensuring direct aisle access for all passengers

“We worked with top Helsinki firm dSign Vertti Kivi & Co – who also have designed Finnair’s new Premium Lounge at Helsinki Airport – to create a fresh and Nordic feel to the cabin,” says the Oneworld carrier.

“Finnair’s new Airbus aircraft feature a cabin interior largely based on the Space Alive concept developed by dSign, where the main idea is to change the mood of the cabin space as the flight progresses.”

A Nordic flavour will be apparent in cabin colour schemes, which will be dominated by what the airline describes as “the fresh, clean, blue-white, high-quality look of Finnair”, with the cabin front wall and other surfaces having a visual look inspired by the letter ‘F’. Galley curtains will carry Finnish themes.

Design facets will be as detailed as special stitching in the business-class seats, adds the carrier, while the internationally known fashion and homeware design company Marimekko will also contribute to the look of the cabin.

Vietnam Airlines will also take delivery of its first A350 this year. It will feature a three-class cabin, with economy, premium-economy and business-class seating. No details have been released on the premium-economy product yet, while the economy-class seats, configured in a 3-3-3 layout, are stock 46cm-wide examples. Business-class seats, meanwhile, are the popular fully-flat Sogerma Solstys model, configured in eight rows of four seats.

Another lighting feature can be found in the aircraft’s entrance lobby: Qatar Airways has equipped this area with a large illuminated dome with Arabic motifs set into the cabin ceiling to give a feeling of space.

That theme is carried over into the business-class cabin, where the central overhead bins have been dispensed with to increase the impression of height and space. Bins above the single window seats are large enough to take two carry-on bags to compensate. The 56cm-wide B/E Aerospace Super Diamond seats convert to 203cm lie-flat beds. The in-flight entertainment screens are 17in wide. Electro-mechanical window shades are fitted that darken windows from fully transparent to 100% light-blocking.

Economy-class cabins obviously give designers less scope with which to play around – it is hard to give a 3-3-3 seating configuration a really distinctive character. Qatar has tried to make the most of it, however, through Recaro’s CL3620 46cm-wide seats that come with a four-way adjustable headrest.

The central overhead bins make their reappearance in economy class, but have been sized to “easily” accommodate carry-on bags up to the maximum size allowable under IATA regulations, while passengers will be able to plug in their own electronic devices via USB and audio ports. Onboard wi-fi will also be available and the seatback Thales Avant high-definition touch-screens are a reasonably-sized 10.6in.

Qatar Airways has also fitted what it describes as fourth generation IFE. One positive aspect of the latest IFE systems is that the power boxes – which for years have been placed under seats, substantially restricting legroom for passengers in the row behind, have been integrated into seat frames for the first time – a substantial benefit on long-haul flights.

The carrier’s Oryx entertainment system also features a touch-screen handset, giving passengers a dual-screen viewing option. They can watch a movie on the main seatback screen and follow the flight’s progress via a moving map on the handset.

A major change in seating in the past few years has been the arrival of the new-generation slim seats, designed to save weight and space.Seat manufacturers and airlines have obviously put these through trials, but they have as yet built up relatively little flying time and feedback from customers. Many have so far been fitted in regional or short-haul aircraft, but how will they feel after an 8-12h flight? Will they give customers the same amount of comfort on long-haul flights as traditional seats with more padding or thicker cushions?

Finnair certainly believes so. “We have Zodiac Z300 slimline seats with a 31-inch seat pitch in a 3+3+3 layout in economy class, and at the front of the economy-class cabin, we have 43 Economy Comfort seats, with comfier headrests, high-quality headphones and four extra inches of leg room.” It is worth noting, however, that they are the same basic Zodiac seat as those further aft. And like Qatar Airways, onboard wi-fi will be available.

One factor that will benefit all users of the cabin is that the aircraft is remarkably quiet. Climbing out of Toulouse airport on a media familiarisation flight last year, it was possible to talk to one’s neighbour without raising one’s voice, although this was at an admittedly light 192t take-off weight. The only jarring aural aspect was the remarkably noisy flap retraction sequence – caused, apparently, by the same high pressure 345bar (5,000psi) system used on the A380.

Otherwise, the surroundings were pleasant. The “Xtra Wide Body” tag Airbus applies to the A350 is not immediately that obvious in the cabin, but it nevertheless had a light, airy feel.

Airbus will be able to monitor customer feedback as the passenger numbers start to mount over the coming year.