The German philosopher Friedrich Nietzsche famously said “that which does not kill us makes us stronger”, which seems a good epithet for the recent experience of Brussels Airlines.

In the space of three years the Belgian national carrier has survived three major crises, from an outbreak of Ebola in its African markets in 2013, to a low-cost carrier onslaught in its backyard, and then a deadly terrorist attack at its home base of Brussels airport earlier this year.

Meeting Bernard Gustin at his airline’s headquarters in the b.house at Brussels Airport, the chief executive talks of the March terror attack with an air of understated defiance characteristic of the plucky European carrier. 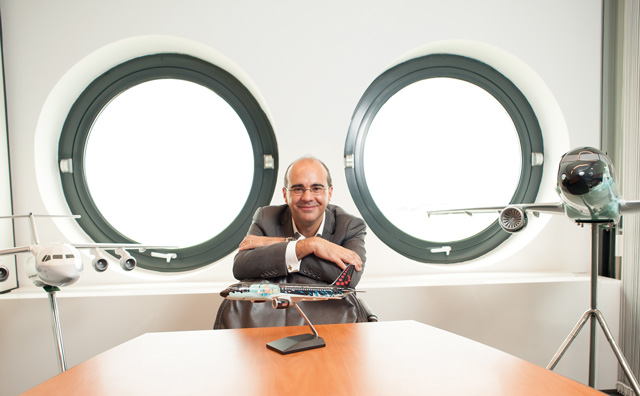 Brussels Airlines has carved out a unique position for itself. Despite its relatively small size, with a fleet of just 50 aircraft, the Belgian carrier has a respectable European network, several transatlantic services and a major African network spanning 17 countries, including Senegal, Burkina Faso, Ivory Coast and Benin.

Gustin admits that the input and support Brussels Airlines received from the Lufthansa Group, which has held a 45% shareholding in the Belgian carrier since 2008, has been a key factor in its success.

Gustin describes the relationship with the German airline group as one that allows Brussels Airlines to stay “small” and “beautiful” while having a “big machine behind you”.

He says the best example of this co-operation was the Belgian carrier’s decision to start flights to New York in 2012 and Toronto this year, “where I got very strong support from the top of Lufthansa”.

Brussels Airlines' transatlantic routes are a key part of its strategy of connecting North America with Africa via Brussels, and that is beefed up by its membership of both Star Alliance and the immunised joint venture on transatlantic markets operated by Lufthansa, Austrian Airlines, Swiss, Air Canada and United. The German airline group has also supported the expansion of Brussels Airlines’ fleet of Airbus A330s for long-haul operations and its African coverage.

But the co-operation has been in both directions, with Lufthansa adopting the Belgian carrier’s “Flex” and “Light” fare products on its own short-haul network, Gustin notes.

“We bring an African network, a small pearl company that the Lufthansa Group can make grow and get a position in this huge, huge market that is Africa,” Gustin says, adding: “It’s not me saying this, it is Carsten Spohr [Lufthansa chief executive] saying this.

“I think the problem when you are at 45% is you are not in and you are not out. But so far we have managed to do very well at 45% but I think it’s because the people are working very well together. It needs maybe one day to be more systemic so that if the people are not inclined to work together, you are part of it, you know.”

Lufthansa was due to decide on the future of its stake in Brussels Airlines in June this year, but this was overtaken by events.

On the morning of 22 March, two bombs ripped through the departure area at Brussels airport, killing 17 people and wounding more than 80. A third bomb was detonated in a controlled explosion later that day.

During the next 24h, which Gustin describes as that “nightmarish day”, the airline faced an immediate crisis, with “four heavily injured people”, “a lot of people under stress” and the dislocation of its operations. Casualties had in fact been mercifully low, Gustin says, because “we were very lucky in our bad luck, in that the sequence of the bombs was that the first bomb was the one removed from our airport ticketing office”.

The second bomb, however, did explode in front of the ticketing office – at the place Gustin discloses he normally meets visiting airline executives. Luckily Brussels Airlines staff had already evacuated to the back of the room and were shielded from the blast.

But it was not to be the end of the ordeal for the carrier’s personnel. That evening news came in of a bombing on the Brussels metro system, and worse was feared.

“We had to at some point lock the building here [at b.house] because there were rumours there was a bomb in the building. No one could leave the building for a few minutes, which after the fact you might say is surreal, but you have one bomb, two bombs, you don’t know where it’s going to stop,” he says.

Once the situation was declared safe, Gustin and his team set to work rebuilding the airline’s operations from scratch. With Brussels Airport out of action for the foreseeable future, in a matter of hours the airline began patching together a network of alternative bases: in Belgium at Liege and Antwerp; and with the help of Lufthansa and Swiss, at Zurich and Frankfurt.

The work was not without its headaches. Gustin recalls IT integration issues in Switzerland and bilateral complexities in Germany, but Brussels Airlines succeeded in getting its network back up and running over the 12 days Brussels airport was closed, and Gustin has nothing but praise and admiration for how his staff reacted to the crisis.

“It was crazy in itself. But the people were so positive. [The] reputation of the company really got strengthened through these events. We were the number three most admired company in Belgium before the event out of the top 50, but we will never know [where we would have been had] the measure been taken after 22 March, but I think it would have been more positive than negative,” he says.

Gustin admits that the attacks and the resulting fall in demand will hit Brussels Airlines financial results, but says he is hopeful the carrier can still achieve at least a breakeven position before compensation claims are taken into account.

Gustin’s confidence in the resilience of Brussels Airlines is not unfounded as the airline has already survived one other major crisis in recent memory.

With its extensive African network, the Belgian carrier was particularly exposed in 2013 when outbreaks of Ebola spread across the West African states of Liberia, Sierra Leone and Guinea.

Through its predecessor Sabena, Brussels Airlines traces back 80 years of business in Africa, and Gustin says it was “clear” from the beginning that the airline would have to “support [the] three countries in heavy difficulty and be part of the solution”. What happened next Gustin did not predict.

“Usually when you have a crisis the few company experts in the domain – us, Air France – we try to stay as long as possible to try to show that we are committed to come back as soon as possible when the crisis is over,” he says, adding: “With Ebola what happened was we were very quickly the only one [still flying].”

As other airlines left the stricken markets in West Africa, Gustin says the carrier took on a wider responsibility than simply being a business. The carrier would operate throughout the outbreak, but the airline boss is clear this was only possible because strict rules of quarantine and safety were adhered to.

“We had very clear rules. It was out of the question that we would take a very specific risk towards my staff and our guests. That means if ever, and I think it was a very good rule, if ever anyone with the symptoms – ie [they are] contagious – had been on board and after a test was proven to be [carrying] Ebola, we would immediately have stopped flying because it meant the safety net we placed in the three countries was not working.”

To prove to staff that the safety measures put in place worked, Gustin took the decision to experience them first hand. Without media coverage, or fuss, he decided to work several shifts as a cabin crew member on flights to the affected areas.

“I could not say, ‘hey guys don’t worry it’s not dangerous but you understand I won’t come with you because I have a meeting in Frankfurt’,” he says.

Despite some “worrying moments”, the airline emerged from the Ebola crisis with its brand not just intact but strengthened, Gustin says.

Passenger numbers on its African services grew 11% last year and Gustin says Brussels Airlines has since doubled its frequencies to Conakry, Monrovia and Freetown and says of Dakar and Banjul. “We are back on track," he says.

Back in Europe, Brussels Airlines has faced a threat of a different kind. Hoping to grab a share of the city’s lucrative business passenger traffic, EasyJet, Ryanair and Vueling have established bases at Brussels Airport. Gustin calls this the "grand slam" of low-cost rivals and estimates he faces 20% competition on routes out of the city, rising to 40% if you include nearby Charleroi. This is far higher than at airports such as Frankfurt and Zurich, he says.

To deal with the threat, Gustin says Brussels Airlines "reviewed completely our marketing approach, our product approach". One response was to drive down unit costs to become more competitive.

He says the carrier has in a matter of a few years reduced its unit costs by 15% and intends to cut them by another 10-15%. Last year he says the carrier reduced costs by 3% without fuel taken into account, and close to 6-7% with fuel. He says this was achieved through "simplified processes", a move towards a single fleet type of A319s and integration with Lufthansa.

But Brussels Airlines also had to compete on price and product. "We responded by lowering our costs so we can be price competitive,” Gustin says. “But we have also a service heritage that we need to build upon."

Fares were made competitive, but not as low as LCC’s. Instead, the carrier introduced a new frequent flyer programme called "Loop", offering a 5% discount in order to attract "people hesitating between us and low-cost on European flights".

Gustin has been pleased with the result and says the Belgian carrier has been able to find a way of differentiating itself from the competition.

This positioning on costs puts in much of the groundwork for its possible role within the Lufthansa group. The German carrier, in announcing it was pushing back a decision on the future of its Brussels Airlines stake to September, said it had been in talks with Brussels Airline about a potential partnership under its new Eurowings concept and the carriers have been working on a possible migration concept.

The German carrier is looking to develop its new Eurowings low-cost concept and is looking to drive further efficiencies for the unit through growth. "Long-term scale effects you achieve only through size," Lufthansa group's executive board member Karl Ulrich Garnadt said in Feburary. "A crucial point will be other companies joining us."

Another factor in negotiations will be the future branding of Brussels Airlines. There has been speculation that the Brussels Airlines brand could be retired, if took on a prominent role in the development of the carrier’s low-cost arm, Eurowings.

Gustin dismisses suggestions that the Brussels Airlines brand will simply disappear, pointing to its strength in the African market, and says such a decision would be a “mistake”. Instead he suggests that a solution needs to be found that draws on the strengths of both brands.

“We need to reinforce that brand where it is unknown and that’s in the rest of Europe or the USA,” he says.

What is clear is a decision on the future ownership of the carrier - and thus its future direction - is imminent. Lufthansa's call option for the remaining 55% stake was pushed back to September.

The decision, says Gustin, "might be earlier, might be later – it's not important as long as find the right recipe.” Gustin's hope is that a tie-up emerges where “we added something to the party” for Lufthansa and “because they [Brussels Airlines] could do things which on their own they wouldn’t be able to do.”