Garuda Indonesia's chief executive is optimistic that there will be further stability in the Indonesian market this year as airlines display more rationality in adding capacity.

Pahala Mansury says the airline saw significant drops in yields and average fares in 2017, but that the situation started to "normalise" towards the end of the year.

"This year, as a whole [in Indonesia], the additional capacity that we expect to see is half of what it was in 2017, so we think that hopefully [there will be less pressure on yields]," he told FlightGlobal in an interview at the Singapore air show.

Garuda will add no aircraft in 2018, as it works to maximise the utilisation of its fleet and get its financials in order. Low-cost subsidiary Citilink will meanwhile take three Airbus A320neos for replacements.

This year, the Garuda Group aims to break even and even carve out a modest profit of under $10 million, which is likely to be a significant improvement from 2017. While it has yet to release its 2017 financials, attributable net loss for the first nine months of the year amounted to $222 million.

To achieve the target, Mansury has put optimising its fleet and network, as well as raising aircraft utilisation as his number one priority.

"We need to improve the connectivity of the routes we have, so that we can better fill the different planes coming from the different routes, from the trunk routes to secondary cities to feeder routes," he says.

To maximise group synergy, it will also start codeshares between Garuda and Citilink this year.

Without adding any aircraft, the airline is confident that it can grow international capacity by 25% and domestic capacity by up to 15% this year, simply by utilising its aircraft better.

While it will launch a number of new short- and medium-haul services to destinations such as Ho Chi Minh City, Manila, Taipei, Xiamen, Xian and Zhengzhou, Garuda will focus more on raising frequencies on services to a number of business destinations it already flies to. These include Melbourne, Beijing and Shanghai. 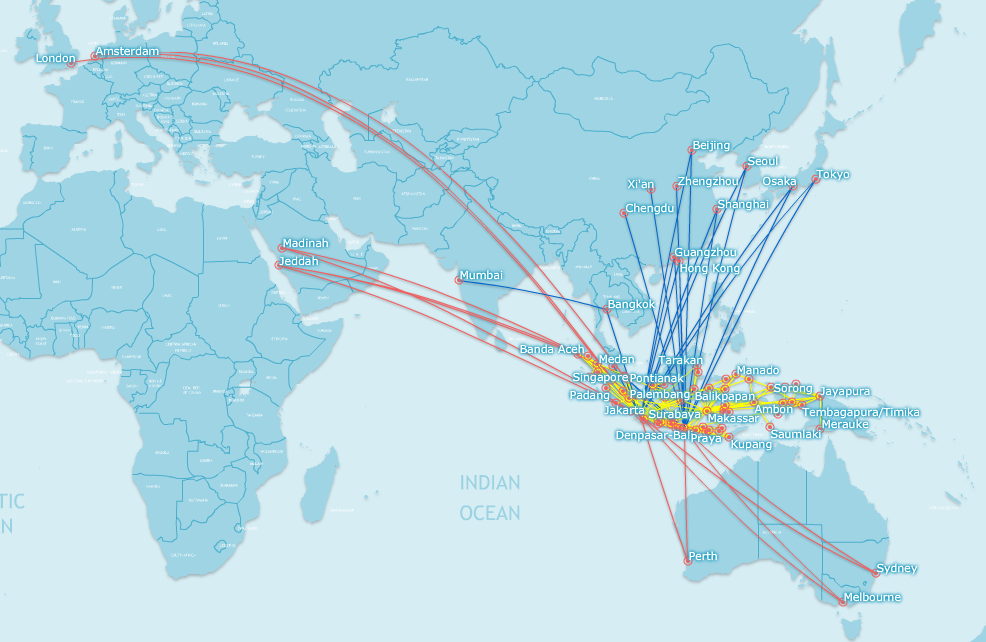 Mansury is aware that slots at these points are often constrained, but is hopeful that reciprocity will be upheld, since carriers from these countries are also seeking rights to Jakarta and Denpasar.

The airline chief also wants to tap into the booming Chinese market, considering the 37% growth in Chinese tourists into Indonesia last year. Garuda has "started to engage" with SkyTeam peers China Eastern Airlines and China Southern Airlines on the possibility of joint venture partnerships on routes.

Despite not expanding its fleet this year, the group is confident that it will not cede market share to its strongest competitor, the Lion Air Group. The group could reportedly take up to 36 aircraft this year, although some will be for its subsidiaries in Thailand and Malaysia.

"With us increasing domestic capacity by 12-15% [through fleet optimisation], this is more or less in line with the domestic growth in Indonesia right now. I don't believe that not adding too much capacity will cost us in terms of market share,” says Mansury.

The potential challenge he sees for 2018 is managing costs. He notes that fuel prices are trending up, and landing fees could go higher this year.

With his banking background, Mansury has also asked his team to raise the proportion of fuel hedging since the group has always been "quite conservative" in its approach to this. While the policy allows for hedging up to 50% of its fuel needs, the carrier's percentage is "much below" this.

This year, Garuda also wants to grow beyond its core business, with Mansury targeting to grow income from cargo by 15% and ancillary revenues by about 50%.