This time last year Monarch Airlines was battling to finalise crucial labour deals and investment talks to give it breathing space to secure its future and complete its evolution from charter to scheduled leisure carrier.

A year, new investor and complete revamp later, the UK carrier is on course to post a profit inside 12 months of restructuring and believes it has a found a sustainable way to adapt to new market expectations. In the process it has shelved charter flights completely, overhauled its network, cut its fleet by a third and reset its labour costs.

"Effectively what we have done is take £200 million [more than $300 million] out of the cost base per annum, and then created a business which is simpler and easier to manage," says chief executive Andrew Swaffield, who joined the airline in April 2014 and has overseen its transformation.

"We have given ourselves two injections. One is business model, which is simpler; and one is cost base, which is significantly lower, and that's what's enabling us to deliver a turnaround from loss to profit in one year, which is very gratifying," he says.

"My view is: airline turnarounds need to be done quickly. You should do it in one year if you can. That implies cutting a little deeper than some might say, but I think it was necessary for us to do that at that stage last year." 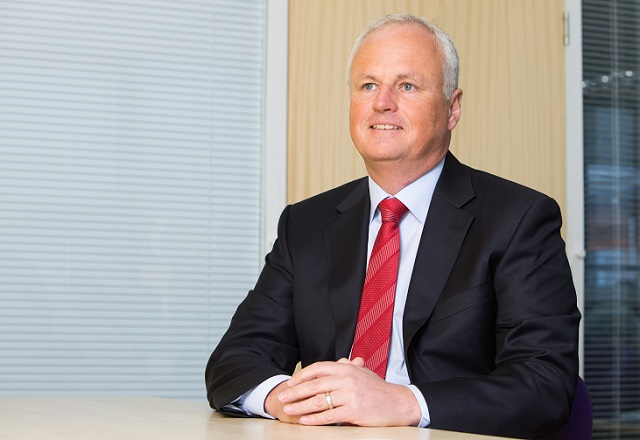 The new strategy involved bringing simplicity to a model which involved it operating a mix of scheduled and charter, both short- and long-haul. The mix was not a profitable recipe.

"Long-haul was only operating with two aircraft. You probably need eight to make it work," says Swaffield. "So long-haul was a problem."

If scale rather than ideology was at the root of the decision to drop long-haul, the move to axe charter operations from this summer was altogether more fundamental. "Charter was basically dying. Monarch had recognised that from around 2006 and had begun the move from 100% charter to, when I came last April, it was 15%," he says.

"There were no doubt that maintaining a rump of charter at 15% came at a quite a considerable complexity. What you've got is one asset being controlled by two minds: the scheduled mind, which is very planned and very long-term; and then the charter mind which is very unplanned and very short-term. The basic idea being: [as] a summer airline you can use your aircraft better in winter by having a charter function. [That] is a sound idea theoretically, provided that you put sufficient effort to make the schedule work. But if you start relying on the charter business, then you never grow your scheduled business, and the two things start to conflict with one another, and I think that started to happen in Monarch.

"My own personal view is that the charter model is structurally flawed now. I don't believe it has a great future... So we made the decision to bite the bullet and remove it completely rather than continue the slow decline, and I think it's paid dividends."

Central to that decision has been a focus on building year-round flying. "Most European airlines are skewed to the summer anyway, but in our case it was more extreme. We were six times bigger in the peak of summer than in the trough of winter. So what needed to happen was an absolute single-minded focus on year-round flying, and really that has to be scheduled. Otherwise, you never get focused enough.

"We had a reasonable number of routes where we flew regularly as a charter that we decided to make into scheduled when we restructured. Consumers now are used to looking for flights on the internet and if you fly as a charter they can't find you," he says. "So our view is if you operate a scheduled service, more consumers will find it. You can still sell through tour operators if you want to; you can let them buy allocations, and still package it yourself through your own tour operator. There is nothing incompatible with tour operators in our view.

"We have scheduled routes that we had as a charter, but that we are now selling to a broader market, which is a lower-risk model for us."

He adds: "It's much easier to manage the profile of a direct scheduled airline. You usually put it on sale a year in advance, you can monitor the bookings. With the charter business it is sometimes a bit lumpy – it all can all go in one go or all come in one go."

That focus on year-round flying was also behind a fleet decision, which was immediately confirmed on securing investment from 90% shareholder Greybull Capital in October 2014. The airline will replace its fleet of predominantly Airbus A321s with 30 Boeing 737 Max 8s, becoming an all-Boeing operator by 2020.

"We are very committed to flying more in the winter, so what underpinned our fleet decision was not flying too much fresh air around in the winter so that we could maximise the summer," says Swaffield. "Faced with the choice, we would rather leave a bit of money on the table in the summer and have a more efficient aircraft in the winter.

"As we transition completely by 2020, we would hope that steep summer-winter curve would be much less, and would start to resemble low-cost carriers rather than a traditional charter carrier."

The blurring of business models means that whatever the origins of European network, charter or low-cost operators, all increasingly share common ground.

"The simpler business model of not doing three things and trying to do one thing really well – I suppose you could say is a hallmark of a low-cost carrier model. We have certainly learned a lot from those guys," Swaffield says.

"We will work have higher utilisation in the winter, focusing on ski breaks, winter sun; we are very interested in year-round routes. You have to do it the hard way."

He adds: "Nothing is easy in this market; it's very competitive. If you have the right cost base, have the right fleet and understand your customer, you can be very successful. We are not going to rush off headlong into a crazy growth spurt, but we do believe there is scope for Monarch to be bigger than it is today."