Among the numerous pictures that line the hallway of Rusdi Kirana’s eighth-floor office at Lion Air Tower, one stands out: a majestic lion staring into the camera, with the words “essence of survival” under it.

The Lion Group founder knows a thing or two about surviving in a harsh environment. The year 2016 was tough for the group’s Indonesian units because of the weak financial enviroment worldwide, slower-than-expected growth in the Indonesian economy and the falling purchasing power of locals, made worse by the 30% depreciation of the rupiah.

“2016 was better than 2015, but it still wasn’t what we expected. Business wasn’t like before – it is still not easy,” Kirana tells FlightGlobal in an interview at the airline’s headquarters in Jakarta.

The group keeps its financial affairs private, and Kirana would only say that Indonesian units Lion Air, Batik Air and Wings Air broke even in 2016, while overseas subsidiaries Thai Lion and Malindo Air have continued to lose money.

Kirana says there are several factors that contributed to a tough year for the Indonesian low-cost carrier. The transport ministry prevented it from getting more slots after a pilot strike, and also stopped it from competing with lower fares by stipulating a price floor. Things have improved since a new transport minister was appointed last July.

This year, Lion believes it will be able to increase capacity by 30% – simply by raising aircraft utilisation from eight to 10 hours. This follows a review by the University of Washington that aimed to restructure Lion’s personnel management and drive efficiency, following years of rapid growth.

The airline boss, however, admits that there is an oversupply of capacity in the market. He believes there will be further consolidation, where only the fittest will survive.

“My strategy is to keep costs as low as I can, that is what passengers are most concerned about… by increasing aircraft utilisation, we don’t need another aircraft or pilot, we just buy the fuel,” he says.

“We are taking this downturn to strengthen internally so that when the economy returns to normal, we can get better profits,” says Kirana.

While the low-cost unit restructures, full-service unit Batik will continue to grow, with about 10 aircraft deliveries in 2016. Created to break Garuda’s monopoly on premium traffic, the unit is aiming to launch services into Australia and India by April. Its only international destination now is Singapore.

With business at home forecast to remain weak, Kirana’s focus is on aggressively expanding Malaysian subsidiary Malindo. The airline is expected to officially take on the Batik Malaysia brand in February, add more than 20 aircraft to its fleet this year, and achieve break even.

The aim is to raise yields and load factor by building an extensive hub network. Around 40% of Malindo’s passengers now connect on the airline’s network, and the target is to bring this figure up to 70%. 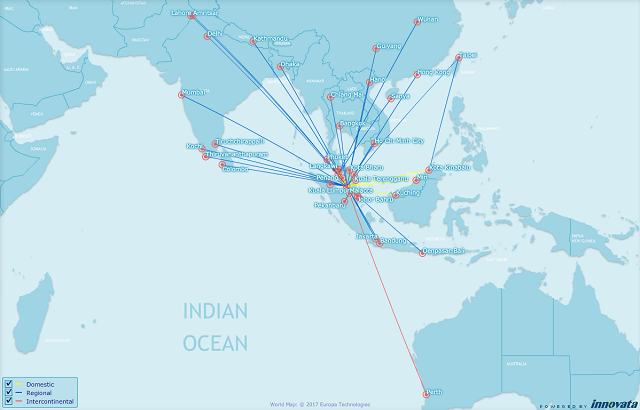 This year, Batik Malaysia plans to break into Japan and Korea, with services to Tokyo, Osaka and Seoul. It also wants to add Brisbane, Sydney and Melbourne to its Australian network, as well as further expand into China.

Rebranding Batik Malaysia will align the airline more closely with the group’s Indonesian unit Batik Air. The strategy is for Batik Malaysia to expand internationally, while Batik Indonesia feeds it passengers from Lion’s stronghold at home.

Kirana says Batik Malaysia is ideally placed for international growth, since unlike Jakarta there are no slot constraints at Kuala Lumpur International airport.

The Indonesian businessman entered politics in 2014, and reveals that he will soon be appointed Indonesia’s ambassador to Malaysia,meaning he is likely to relocate to Kuala Lumpur in the coming months.

On his other joint venture, Thai Lion Air, Kirana says that while the unit is not yet profit-making, losses are small – especially in view of the fact it is still in the growth phase. He expects the Thai airline to be profitable as soon as aircraft utilisation is raised by having more night flights on international services.

Asked if there are plans to defer any of the 435 aircraft on order because of the weak Indonesian market, Kirana says the group will have no issues taking delivery of new aircraft due to Lion’s already-established network, as well as the expansion of its overseas subsidiaries.

“Some things, such as the economy, are beyond my control – but what I’m skillful at is to make the airline the strongest in terms of costs, reliability and safety. If we can do that, even though the economy is not as good as we had expected, we can still survive,” Kirana says.

However, Kirana has no plans to set up more overseas units in the near term, despite rumours of possibilities in Vietnam and Australia. “It’s a good time for us to consolidate in Indonesia," he says. "We have to expand, but first we have to focus on the situation at hand, which is not easy. When you start a new unit, for sure you will lose money initially. On the other hand, the economy is also challenging.”

Plans for its initial public offering has also been pushed back in view of the weak economy. Kirana adds that the group is “not desperate” for cash.

“The time is not right for an IPO. If we do one now, I don’t think it will be successful," he says. "The IPO doesn’t only depend on the company, but also on the market. You need to have a good moment, the right moment.”