Dassault Aviation has revealed that the consortium developing the Neuron unmanned combat air vehicle demonstrator now plans to fit the aircraft with twin internal weapons bays under newly released revised configuration details, designated design “781-20”.
The consortium also plans to use Mk82 and GBU 12 bombs to carry out proposed ground strike testing of the aircraft once its basic flight characteristics have been proven.
The 781-20 configuration is near final, says Dassault vice-president for international relations Yves Robins, but further refinements are possible. “The overall shape definition is almost decided upon.”
Design 781-20 strengthens the visual parallels between Neuron and the Boeing X-45A, with near identical forward fuselage side profiles, but differing wing forms. Design 781-20 has a wing area of 50m2 (540ft2) compared with 36m2 for the X-45A and 58m2 for the X45C.
“The main advantage of this choice obviously is in both controllability and radar cross section.”
Speaking at the IQPC UCAV 2006 conference in London 28 November, Robins said the overall design cleared its first intermediate “synthesis” review in September, with a second to follow in February to mark the end of the project pre-feasibility phase. 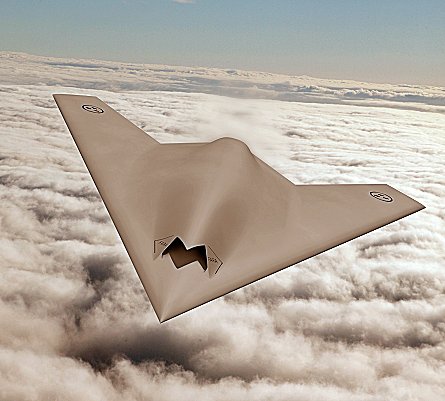 The current phase “includes about 12 main technological roadmaps” Robins said. Seven of those are dedicated to low-observable technologies to meet programme goals for reduced radar, infrared and acoustic signatures.
“The pre-feasibility assessment is almost done. We have identified most of the technical risk. Neuron is a technology demonstrator and it will never be produced in series. Being a technology demonstrator means that we have to accept a certain level of risk – however we have to carefully define that level of risk through trade-offs.”
Supporting high-speed windtunnel testing of the external design and inlet has also begun, with this being carried out in Switzerland by Ruag.
Other partners in the project include Saab Systems, Hellenic Aerospace Industries, EADS Casa, Alenia Aeronautica and Thales.
Some 40 trade-off decisions have so far been made in the technical domain Robins said, as part of the process of identifying programme risks.
“It is really through an iterative process between risk mitigation and test and measurement that we succeed in fine-tuning what will be the real Neuron definition in 2008.”
The initial internal weapons bay module will be equipped with a pantograph type weapons extension and release system to be supplied by Ruag.
Later stages of the flight-test programme will see the integration of a Smart Integrated Weapons Bay (SIWB), which is under development by Alenia Aeronautica. The SWIB module will incorporate the Ruag pantograph system and will add an electro-optic imaging sensor and laser designator supplied by Galileo Avionica. That sensor system will be mounted at the head of the bay, with development contracts signed on 19 June this year.
Once incorporated into the Neuron demonstrator, initial ground-based testing of the both weapons bay types will be first carried out at the French air force’s flight test centre at Istres. Flight testing of the SWIB will be carried out at Sweden’s Vidsel test range and the Italian ministry of defence’s Perdasdefogu facility on Sardinia. Actual weapons separation testing will be restricted to Vidsel.
Robins revealed that studies over the past 12 months had included assessment of a potential two engine configuration that would have used twin Snecma Larzac powerplants and either one or two inlets, before finally settling on a modified Rolls-Royce Adour series plant, with an agreement with that company signed in July this year. Volvo is developing the engine exhaust nozzle under a separate subcontract finalised with Saab in March.
He also confirmed that the key reason behind abandonment of earlier cranked wing configurations had been the desire to maximise low observability. The final system is planned to have a radar cross-section equivalent to the nose boom on a Dassault Rafale fighter.
Configuration drawings of the 781-20 design shown at the conference by Robins, but not issued by the company, indicated radar-absorbent materials would be included in the wing leading edge and nose sections of the aircraft. The demonstrator will have just four control surfaces.
Planning for the use of commercially available subsystems has seen decisions to use a derivative of the Dassault Falcon 900EX nose landing gear as the Neuron main gear. Similarly, the Mirage 2000 nose gear will be ported to perform the same role on the UCAV demonstrator.
The next major design review on the €405 million ($534 million) project is scheduled for June 2007. Work on the definition phase for systems capability is expected to start in the first quarter of 2008, followed by the start of airframe definition in the fourth quarter of that same year.
In parallel, structural and subsystem manufacture would begin with final assembly of the first demonstrator occurring between the first and third quarters of 2009.
Robins said 2008, 2009 and early 2010 will be devoted to the development and final assembly, with this to take place at Istres in southern France said Robins.
Low observability ground testing will be carried out by the French DGA armaments agency, which is the co-ordination and funding authority for the project, at a facility near Rennes in Brittany.
Neuron’s first flight is planned for 2011, but the French DGA indicated earlier this year that the milestone could slide into 2012.
Robins said the flight-test crew will comprise one demonstrator commander, a test co-ordinator, a flightline team, ground and test controllers, and a safety officer.