Following a lead example that was delivered in late 2016, the new command-and-control aircraft has been acquired under a $750 million deal that also includes ground support equipment and a logistics support package. Rome has separately purchased an IAI-produced Earth observation satellite under its part of the arrangement, while Tel Aviv acquired 30 Leonardo M-346 advanced jet trainers for the Israeli air force.

"The first [CAEW] aircraft has already participated in several drills with NATO air forces, to the utmost satisfaction of the customer," Israel's defence ministry says. 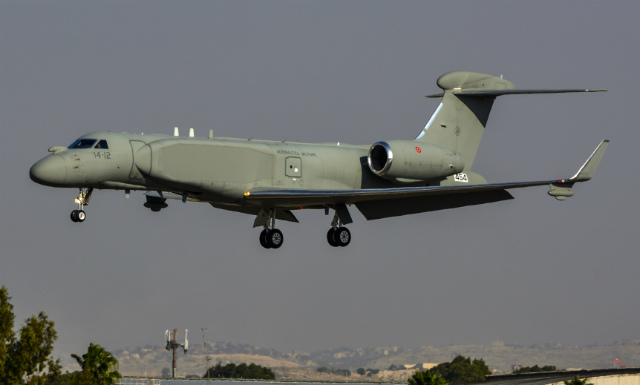 Developed by IAI's Elta Systems subsidiary, the CAEW adaptation of the G550 has been in service with the Israeli air force for 12 years, and is also operated by the Republic of Singapore Air Force. The heavily adapted business jet also features electronic support measures and electronic intelligence (ELINT) capabilities, while a dedicated ELINT variant of the G550 is also in Israeli service.

IAI in 2015 unveiled its proposal for an ELI-3360 maritime patrol solution based on Bombardier's Global 5000 business jet.

"It is similar to the [Boeing] P-8, but with advanced sensors," says Avishai Izhakian, deputy general manager of Elta's airborne systems and radar division, who describes the solution as "very cost effective".

The Israeli company is in various stages of negotiations with potential customers about its special-mission aircraft, Izhakian adds.