A jammed elevator appears to have contributed to the March runway overrun of an Ameristar Air Cargo Boeing MD-83 in Michigan, according to the National Transportation Safety Board.

Pilots of the aircraft, registration N786TW, rejected takeoff from Willow Run airport in Ypsilanti, Michigan on 8 March. The aircraft overran runway 23L and stopped on grass 1,000ft from the end of the runway, according to the NSTB and accident photographs.

All 109 passengers and seven crew evacuated via escape slides, and only one person suffered minor injuries during evacuation, says the NSTB

The NTSB's update focuses on the right elevator, on which flight data indicates did not move during taxi or the takeoff roll.

The aircraft, however, did not pitch up, says the NTSB.

"When investigators tried to move the elevator surfaces by hand, the left elevator moved normally, but the right elevator was jammed in a trailing edge-down position (airplane nose down)," says the NTSB.

"The right elevator geared tab inboard pushrod linkage was found damaged, which restricted movement of the right elevator," it says. "After the damaged components were removed, the elevator could be moved by hand." 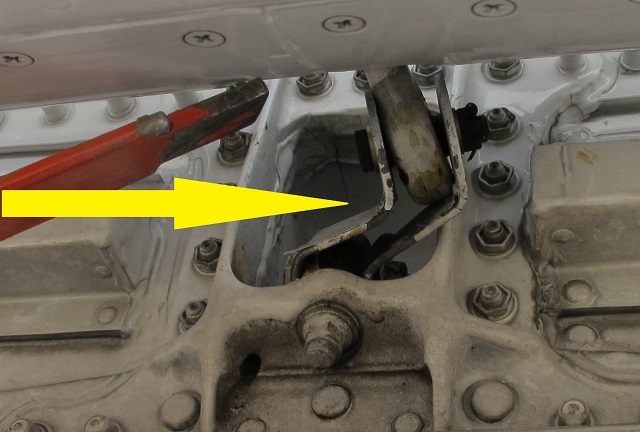 Photograph showing the location of the inboard geared tab linkage.

The aircraft's cockpit control column and elevator control tabs did move as commanded, the NTSB says.

The board adds that previous flight data indicates both elevators moved normally. The aircraft had arrived at Willow Run two days prior, according to the NTSB.

Ameristar's chief pilot, who was in command of the aircraft, had 2,462h in DC-9-family aircraft, the NTSB says. The captain, who was flying the aircraft from the left seat, had 8,495h in DC-9 types.

Though the NTSB's accident update does not mention weather conditions, winds up to 68mph (42km/h) buffeted Michigan the day of the incident, even causing controllers to evacuate the Willow Run control tower at the time the MD-83 took off, according to reports.

Earlier NTSB documents said the wind blew at 35kt, and gusted to 50kt, at Willow Run at the time of the accident.

Addison, Texas-based Ameristar tells FlightGlobal it is cooperating with the NTSB, but it declines to comment specifically about the incident, citing the ongoing nature of the investigation.

McDonnell Douglas manufactured the MD-83 in 1992, according to Flight Fleets Analyzer. Avianca operated the aircraft from 1992 until Ameristar purchased it in 2010, when the MD-83 had accumulated 40,000h and 38,800 cycles, Fleets Analyzer shows.