Japan should reach a decision “within months” on whether to pursue a modernisation programme for its oldest Boeing/Mitsubishi F-15 combat aircraft, or replace them with a new type, a senior air force official has revealed.

Tokyo is already upgrading its youngest F-15Js to an enhanced MJ configuration and modernising its indigenous Mitsubishi F-2 fighters, and will replace its McDonnell Douglas F-4 Phantoms with 42 Lockheed Martin F-35As from 2016. 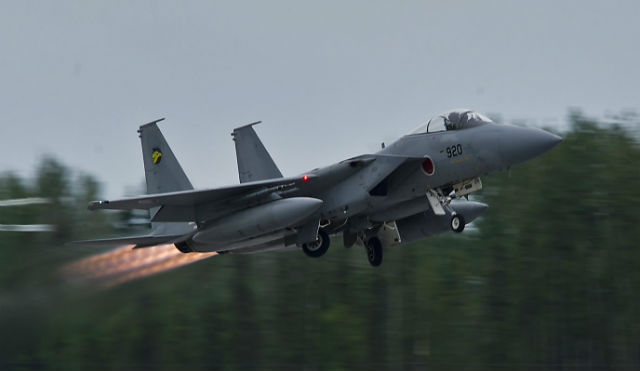 US Department of Defense

“Beyond the horizon, planners are looking at options,” says Col Koji Imaki, head of the Japan Air Self-Defence Force’s F-35A programme office. “A plan which will go public at the end of this year should provide answers to that.”

Japan’s first two F-35As will be completed at Lockheed’s Fort Worth site in Texas, with following examples to be delivered from a final assembly and check-out facility which is now being established with Mitsubishi Heavy Industries in Nagoya. Being acquired under an F-X deal, the air force’s conventional take-off and landing aircraft will equip two combat squadrons.

Any decision to replace the service’s oldest F-15s could open the door to other bidders, potentially including defeated F-X competitors Boeing and Eurofighter, which had respectively been offering their F/A-18E/F Super Hornet and Typhoon designs.

Meanwhile, 13 of the 18 F-2 fighters and trainers that were extensively damaged during a post-earthquake tsunami in early 2011 are now being repaired, for eventual return to service. Japan developed the type from Lockheed’s F-16, and acquired 94 examples, which Imaki says had an average unit cost of $120 million. “There was a downside in cost, due to the small offtake,” he told IQPC's International Fighter conference in London on 13 November.