A Boeing 737-900 operated by Jet Airways suffered a main landing gear collapse after arriving at Mumbai International airport on the evening of 3 March.

The aircraft, bearing registration VT-JGD (MSN 33740) had just completed flight 9W 354 from Delhi to Mumbai when crew reported a technical fault in the main landing gear at 21:52 local time. Tweets from passengers indicate the incident happened while the aircraft was taxiing to the terminal. 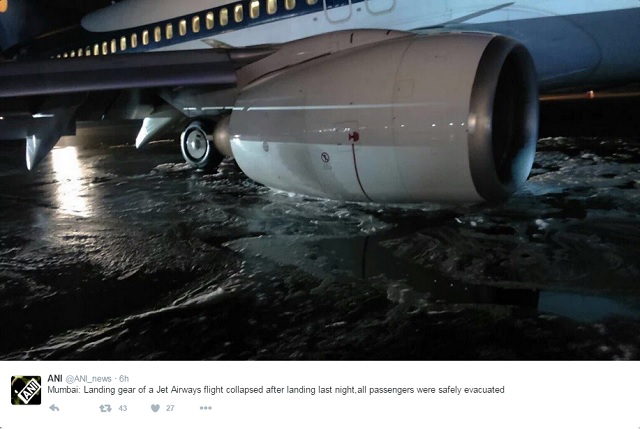 All 120 passengers and eight crew members were safely evacuated. The aircraft has been moved to the carrier's Mumbai hangar.

"The airline has kept the Directorate General of Civil Aviation (DGCA) informed about the event and is extending all co-operation," adds Jet.

Flightglobal's Fleets Analyzer lists that Jet operates a fleet of 105 aircraft, of which 75 are 737s. Two units are of the -900 variant. Jet-managed VT-JGD is a 2003-vintage aircraft.