JetBlue Airways will move to the under-construction South Terminal at Orlando International in 2021, supporting its plans to grow at the airport.

The New York-based carrier and the airport have reached an agreement for JetBlue to anchor the new terminal with preferential use of 14 gates when it opens, documents from a Greater Orlando Aviation Authority board meeting on 16 May show.

"This move will give JetBlue the real estate needed to expand its network in Orlando in the years to come," the airline says. "We’re excited to secure our future in Central Florida as we look to grow to 100-plus daily departures at [Orlando]."

JetBlue will operate up to 69 departures a day from Orlando in June, FlightGlobal Diio schedules show.

The airline operates from gates in Airside 1 connected to the airport's North Terminal, which opened in 1981.

To accommodate JetBlue in the South Terminal, the airport has expanded the scope of the phase one build-out by three gates to 19, the documents show. The facility will have parking positions for 27 narrowbody aircraft, it adds. 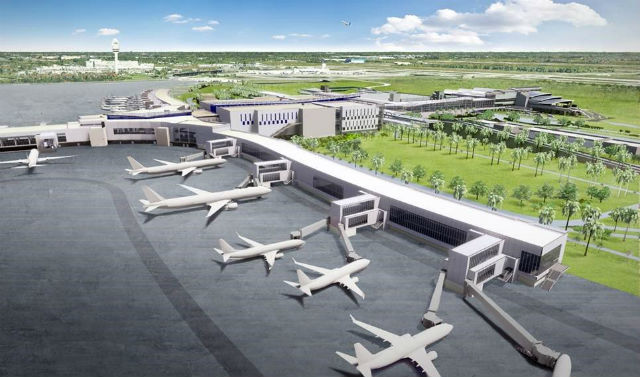 Rendering of South Terminal with the three additional gates

All gates in the South Terminal complex will be common use, with JetBlue sharing the facility with 12 other carriers, the Orlando airport says.

JetBlue and its partners "require both domestic and international facilities of the size and design that can accommodate a wide spectrum of aircraft", making them well suited to use the South Terminal, Orlando aviation authority executive director Phil Brown wrote to JetBlue chief financial officer Steve Priest in a letter on 9 May.

JetBlue had 12.8% share of Orlando passengers in 2017, airport data shows. This was third behind Southwest Airlines with 24.7% and Delta Air Lines with 13.9%.

The South Terminal, which will have 26 gates when fully built, includes the airport's recently opened intermodal terminal. Brightline rail service to West Palm Beach, Fort Lauderdale and Miami is scheduled to begin in 2020.