Kuwait has confirmed its order for 28 Tranche 3 Eurofighter Typhoons, making the Middle Eastern nation the eighth customer for the type.

The governments of Italy and Kuwait on 5 April finalised the contract, which will see the aircraft assembled at the Turin facility of Eurofighter partner company Finmeccanica, the commercial lead for the consortium on the deal.

All 28 aircraft will be integrated with the Euroradar Captor E-Scan active electronically scanned array radar.

The contract also covers logistics and operational support, plus training of Kuwaiti air force flight and ground crews in conjunction with the Italian air force, which also operates the type. Ground-based infrastructure required for the Typhoon will also be installed in Kuwait.

Mauro Moretti, chief executive of Finmeccanica, says this is the largest contract the company has ever received, and will benefit the consortium partners as well as smaller Italian companies.

The 22 single- and six two-seat Typhoons for Kuwait will undergo final assembly in Italy, but manufacture of the front fuselage and vertical tail for the 28 aircraft will be undertaken in the UK by Eurofighter partner BAE Systems.

“We welcome the signing of the contract today between Italy and Kuwait for the supply of 28 Eurofighter Typhoons,” BAE adds. “The state of Kuwait will be the third country in the Middle East, and the eighth country overall to operate the aircraft. This confirms Typhoon’s position as the most advanced new-generation swing-role combat aircraft available today.” 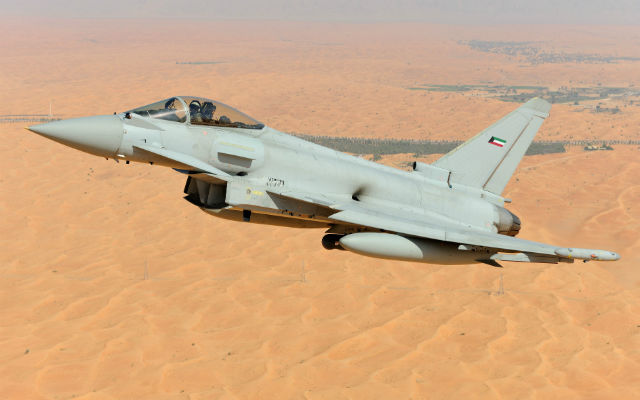 Eurofighter first revealed Kuwait’s selection of the Typhoon in September 2015, three years after the previous order for the type, from Oman.

The other Middle Eastern customer for Typhoon is Saudi Arabia, while Austria, Germany Italy, Spain and the UK also operate the fourth-generation combat aircraft.

“The confirmation of this order is further testament [to] the growing interest in the Eurofighter Typhoon in the Gulf region,” Volker Paltzo, chief executive of Eurofighter says.

“It will enable Kuwait to benefit from the critical mass being developed in the Gulf and the many advantages that it brings to an air force in terms of interoperability, training and in-service support.”