Bombardier flew the Learjet 85 on 9 April to launch the flight test campaign after a one-year delay, moving the company closer to establishing a new target for entry-into-service of the primarily-composite, mid-size business jet. .

The first aircraft – registered as N851LJ – rolled onto the runway in Wichita, Kansas, after emerging from Learjet factory on the western side of Mid-Continent Airport. After taking off at 08:13 in Wichita, the crew landed 2h13min later.

Launched nearly seven years ago, the first flight was originally scheduled in early 2013, but delays loosely attributed by Bombardier executives to issues building the composite structure and systems postponed the milestone event. 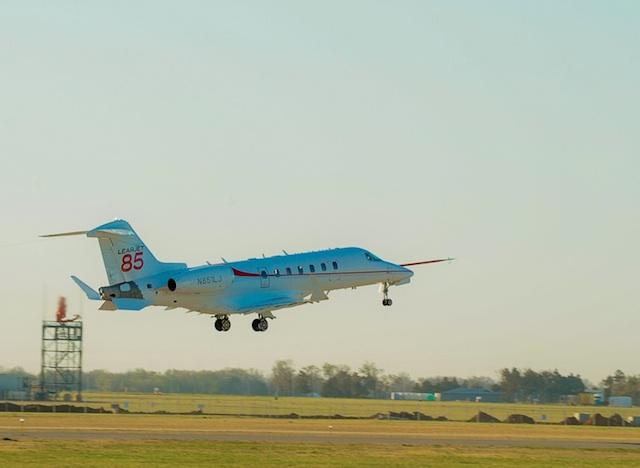 As delays stretched from the third quarter of last year to early April, Bombardier also waited for first flight to clarify the timing of entry-into-service for the Learjet 85, even as the company tests the CSeries and continues to develop the Global 7000/8000 aircraft.

By entering the flight test campaign, Bombardier moves a step closer to announcing the new schedule for first delivery of the Learjet 85.

“We will review and analyse the results following the first flight and we will communicate a new EIS schedule when ready,” says a Bombardier spokeswoman.

The Learjet 85 is the Wichita division’s most ambitious project to date.

It is designed to become the “largest, fastest and furthest Learjet ever”, says Learjet vice-president and general manager Ralph Acs, speaking in an online video posted by the company shortly after the aircraft took-off for the first time.

The Learjet 85 builds stretches the company’s portfolio into the 9-passenger, 3,000nm, midsize jet sector, where it will compete with the Embraer Legacy 500 that enters service in the first half of this year.

Bombardier designed the Learjet 85 with composite wings and primarily composite structure in the fuselage. The wings are fabricated in Belfast, Ireland, then shipped to Queretaro, Mexico.

In Mexico, Bombardier assembles the wings, fabricates the fuselage and makes the wire harnesses for the aircraft. The components are then trucked north to Wichita, where the aircraft are assembled, tested and – eventually – delivered.

The aircraft is powered by a pair of Pratt & Whitney Canada PW307B engines and features the Vision flight deck, which includes the Rockwell Collins Pro Line Fusion integrated avionics system.