Lockheed Martin offered a vivid glimpse on 8 December of its preparations to win a hotly-contested contract to supply 350 trainers to the US Air Force.

A newly-converted factory in Greenville, South Carolina, was opened for to the press for the first time to give journalists a tour of the company’s proposed final assembly line, suite of ground-based training system demonstrators and even a brief flying display of the first of two Lockheed/KAI F/A-50s to arrive in the USA for a risk-reduction activity. 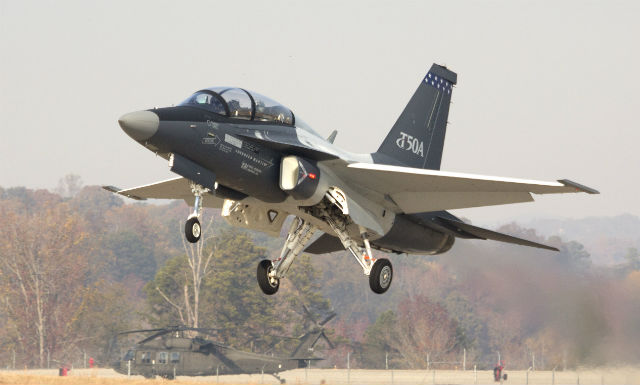 The four-way competition between Lockheed’s T-50A, Boeing/Saab’s T-X, Northrop Grumman’s Model 400 and Raytheon/Leonardo’s T-100 remains up to a year away from a conclusion. Lockheed expects the USAF to release a final request for proposals by the end of the year, starting a 90-day clock for the bidders to submit their proposals. The USAF evaluation could take months, but Lockheed expects to hear the service’s decision by the end of 2017.

In the meantime, the bidders are pursuing different strategies for promoting their bids. Raytheon will host the company’s first public event on 12 December on the site of a greenfield factory in Meridian, Mississippi. Boeing hosted a highly publicized unveiling of the first T-X prototype in a September ceremony in St. Louis, Missouri, but since then has gone quiet. Northrop allowed its prototype Model 400 to be photographed by passers-by at the company’s flight test base in Mojave, California, but has almost no other public statements about details of its bid.

By contrast, Lockheed is underscoring what it considers the lowest-risk approach in the competition by being flagrantly open about details of the company’s approach to winning the T-X competition. The company had considered proposing a Skunk Works-designed aircraft, but chose instead to offer an updated and improved version of the F/A-50, a light attack variant of the T-50 trainer that entered service 14 years ago. Lockheed considers the Greenville site itself as a low-risk decision, as the 11 hangars the company owns already hum with an experienced workforce that has modified thousands of US military aircraft since 1984.

While rivals hold back basic details of decided features, Lockheed officials openly acknowledge the components of their bid that remain undecided. Lockheed plans to modify the F/A-50 by removing the internal gun, adding a large area display, installing a dorsal aerial refueling tank and tweaking the cockpit ergonomics, including moving the rudder pedals back a few inches to accommodate the USAF’s broader range of requirements for pilots’ sizes.

Other decisions have yet to be made, including the supplier for the ejection seat. The Martin-Baker Mk16, which is installed in the Lockheed F-35 as the US16, is featured in South Korea’s T-50 trainer and F/A-50 fighter. But Lockheed is considering the United Technologies Aerospace Systems ACES 5 ejection seat, which is the latest version of the ACES franchise established in the Lockheed F-16, Boeing F-15 and Northrop Grumman B-2. Another item up for grabs is the supplier for the T-50A’s unique active sidestick controllers, which allow the instructor pilot in the back seat to physically see how the student pilot in the front seat is making control inputs.

Lockheed also showed off a full suite of ground-based training systems, with seven major components prepared to enter service almost immediately. A slight exception is the domed operational flight trainer. The demonstrator on site today is shown with 20-27 visual resolution. That beats 20-40 acuity of the F-35’s domed trainer, but falls short of the USAF’s 20-25 requirement. But Lockheed says they have the technology to meet the USAF’s requirements, along with the capability to upgrade as projection technology advances.

Lockheed’s test pilots, meanwhile, are getting acquainted with the aircraft itself, a pre-requisite in a competition that assigns the winning bidder with the task of training the USAF’s initial cadre of instructors. Though developed from the wing and fly-by-wire control architecture of the F-16, Lockheed’s pilots have perceived several improvements in the T-50. Compared to the F-16’s highly sensitive sidestick, the T-50’s controller is more forgiving to suit student pilots, says T-50A chief test pilto Mike “Red” Ward. The T-50 also was developed with different landing gear than the F-16, averting the latter’s reputation for bouncing too many landings, Ward adds.

The point of all this activity is to underscore that Lockheed is ready to meet the USAF’s timelines. In fact, Lockheed says the company is prepared to achieve initial operational capability in fiscal year 2023, or one year faster than the government’s latest schedule.