A UK consortium has outlined plans for a new Thames Estuary airport to replace Heathrow as London’s hub.

The London Britannia airport would boast six runways with a capacity to handle 172 million passengers per year and would operate 24h a day, the Thames Estuary Research and Development Company (Testrad) consortium states.

Built on a “blue brownfield” site to the north of the Isle of Sheppey, the airport would cost £47 billion ($75 billion) and take seven years to construct once local planning approvals had been granted. 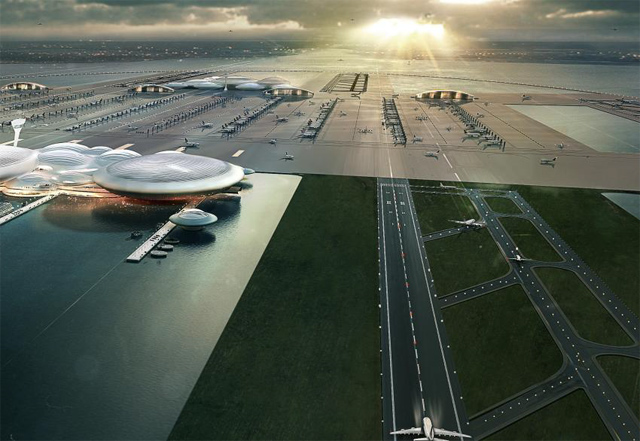 London Britannia would be connected to existing high speed lines, Crossrail and “an enhanced direct rail link to Waterloo”, with travel time into the capital estimated at 30min.

A logistics centre would be constructed at Sheerness and the A249 would be upgraded to provide a new motorway connection.

An international ferry terminal and “logistics dock” would also be added.

Developed by architects Gensler, the airport proposal has the backing of London Mayor Boris Johnson and was previously dubbed “Boris Island”.

Under the plans London Heathrow airport would be “recycled” as a new borough with residential housing for 300,000 people and generating approximately 200,000 new jobs, the plans state.

Gensler estimates the sale of Heathrow to land developers would raise £45 billion, which could be used to fund the new Estuary airport.